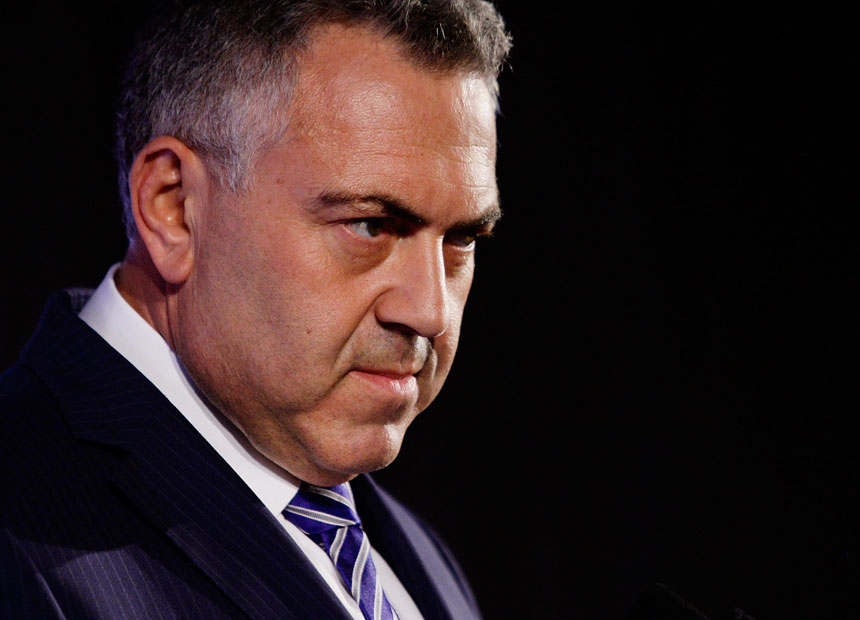 The Commission of Audit is due to release its own recommendations for budget cuts tomorrow ahead of a “horror” budget from the Abbott Government.

With the age of entitlement over, are we at least entitled to be nervous?

The Federal Budget is on both a 13th and a may-day. So, yeah, all right, we get the hint.

The official line suggests Budget deliberations have included a viewing of Fight Club, but the tight-lipped Government has been leaking, then angrily denying the rumours, for months.

Tomorrow (Thursday) the shadowy Commission of Audit’s wish list for Budget cuts will be revealed; the only certainty being that the cuts won’t much hurt any of them.

It is shaping as a bumper Budget for fertile, female fighter pilots who don’t much watch the ABC or SBS. No so good if you’re a Government penguin researcher, huskie handler or a climate scientist. Or climate anything. The Australian Council of Trade Unions tips tens of thousands of jobs will go.

It is shaping as a bumper Budget for fertile, female fighter pilots who don’t much watch the ABC or SBS.

The Budget is serious about tackling Australia’s biggest black hole, the deficit. Other giant black holes, principally ones owned by Clive Palmer and Gina Rinehart, are less problematic.

The Abbott Government was elected on its belief that the Budget was both down the toilet and in need of a couple less taxes, on hard-luck polluters and dirt-poor miners. To pay for that, it is, reportedly, hitting $80,000-and-up a year families with a $1000 deficit levy to balance the books. Then giving back $3000 a week to some new mums. Swings and roundabouts.

ACTU President Ged Kearney says the deficit levy is nasty diversion from savage cuts to jobs, public services, and social security: “There is no emergency – this is distraction politics.”

She is right that we have been driven to distraction.

Will the pension age go up?

The big scary rumour is that the pension age will be raised to 70, so 67-year-olds can be on cheaper unemployment benefits.

This is plausible because it is not a pension cut, as such. You can’t have your pension cut, if you don’t get it in the first place, and if you complain the Grey Army commandant will report you to the Commission of Audit, possibly? Odds are it will not happen this Budget, or term.

At the moment about 590,000 Australians are aged 67-70 and mostly retired. A few million more are champing at the bit. Deprive them of the aged pension, you would save $14 billion a year, costing each about $50,000, on average. Factoring in the assets test on the home. Superannuation-grabbing age could go up, to make it stretch those few extra years.

Health, pensions and schools were immunised on election eve, but the science-shy Government is now doubting the benefits of such immunisation.

HECs student loans might be outsourced to someone prepared to more ruthlessly incentivise student debtors. Pensions, who knows? There are rumours the government will require their own check up on how incapacitated recipients are.

Tony Abbott’s private health lobby cohort Terry Barnes says $6 to sit in outpatients is fair enough. It is certainly value – $6 for five hours probably. This is supposed to keep the frivolous afflictions of the cash-strapped at bay. And save $750 million. Outpatients is apparently some people’s idea of a top night out.

The Canberra-based economic forecaster Macroeconomics report says $18.8 billion a year can be cut out of the welfare budget, and to cut early and cut hard.

The think tank, none of whom are living hand-to-mouth on a pension, want to remove the senior supplement which is paid to all seniors regardless of income ($2 billion).

They want to put hospitals on piecework, so much per procedure. Put the family home in the pension assets test, tweak aged care co-payments ($450 million), cut Family Payment Part B off at $100,000 and audit Medicare ($1.3 billion). It goes on.

Overseas aid is in for the axe, $4.5 billion, but we do pump a fair bit into Manus Island.
Unlike a claimed 97 per cent of climate researchers, the Commission of Audit’s Maurice Newman, renewable energy review chief Dick Warburton, and the one scientist in the Science-Ministryless Abbott Government, WA MP Dr Dennis Jensen, say the jury is out.

The Government, however, is less sceptical about the wisdom of doling out Direct Action cash to ease the squeeze for guilt-stricken big polluters. This should not be confused with an evil price on carbon, because the $2.55 billion is ours.

All this, though, will be cold comfort for the Australian Antarctic Division crew in Hobart. The climate science hot spot is expected to be decimated. The Environment Department’s funding will be slashed by $100 million over four years, 670 jobs, a quarter of its workforce, 250 by Christmas. Alternative funding models are being explored. Ice-palace hotels have been suggested.

To Joe Hockey’s annoyance, the number of people in employment rose by 18,100 in March, building on February’s 48,200 increase, but that can be addressed. These are supposed to be crisis times for heavy, if uneven, lifting. If Mr Hockey resigns in frustration, or just to help the jobless number along, he will go out on $270,000 a year pension.

Nasty surprise in the sky

It is good, too, that the government says we have $12.4 billion for 58 American F-35 Joint Strike Fighters, the nastiest surprise in the skies. It was criticised by the pentagon for having pieces that fall off, but they have probably found some longer screws by now. The plane boasts stealth technology and evasive skills usually only found in Cabinet.

Like the Budget, they are designed so by the time you see what’s coming, you’re already a sad wreck looking for a parachute, and there is one.

If the Carbon Tax ever comes off, that’s a forecast $11 a week back for the average battler family, nearly two Outpatients visit!

How Hockey’s horror budget hits you