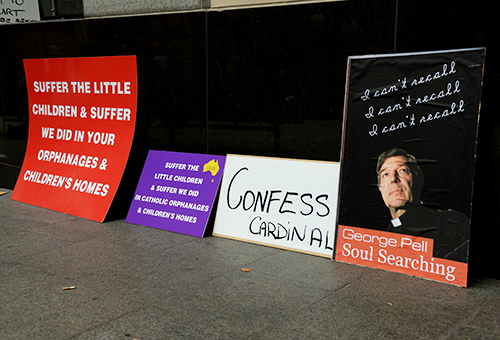 Senior Catholic Church leaders in the Vatican viewed people who complained about sexual abuse by priests as enemies of the church, Cardinal George Pell has told an inquiry.

Dr Pell told the royal commission into child sexual abuse on Monday that the understanding of Catholic Church leaders in Rome of issues of abuse was “way behind” Australia in the 1990s.

“The attitude of some people in the Vatican was that if accusations were being made against priests, they were being made exclusively or at least predominantly by enemies of the church to make trouble, and therefore they should be dealt with sceptically,” he told the commission.

“I think there was more of an inclination to give the benefit of the doubt to the defendant rather than to listen seriously to the complaints.”

Dr Pell said attitudes in Rome, the global centre of the Catholic Church, did not change until “quite a deal later”, when a delegation of American bishops “explained vigorously to the Vatican that it wasn’t just the enemies of the church who were doing it, as the Nazis had done and possibly the communists”.

“But in fact they were genuine complaints, and good people, people who loved the church, were saying it’s not being dealt with well enough,” he said.

Dr Pell said attitudes in Australia were “not anything like the same degree”.

The former archbishop of Sydney is making a much-anticipated appearance before the royal commission, one week before he is due to take up a new position in Rome as prefect for the secretariat of the economy of the Vatican.

Dr Pell gave evidence that he drove the establishment of a committee to deal with sexual abuse by clergy while Archbishop of Melbourne after 1996 because he saw an urgent need for an effective system for dealing with victims of abuse.

The Melbourne Response, which included a cap on potential payments to abuse victims, was developed because it was more independent than a national plan, Towards Healing, being developed by the church, Dr Pell said.

Commissioner Peter McClellan asked Dr Pell if he appreciated that many people did not see the Melbourne commissioner as independent.

Dr Pell said he thought it was “most unfortunate and very unjust” that the commissioner’s integrity had been impugned.

Cardinal Pell was met at the royal commission by people demanding that he tell the truth.

The cardinal arrived in a white car just before 9am at Governor Macquarie Tower in Sydney.

As he was driven into the car park, a placard saying “tell the truth to the Royal Commission” was pressed up against the window of his car.

Jenny Brownley from Care Leavers Australia Network (CLAN) practically stopped the car and made sure the cardinal, sitting in the passenger’s seat, saw her message.

At the entrance to the car park, a sign reminded the church that children had suffered at the hands of its priests.

On the Farrar Place side of the tower, where the hearing is underway on the 17th floor, the CLAN group added extra signage to the red placards calling on the Catholic Church to own up to its “sins”.

On the packed 17th floor, abuse victim John Ellis was clapped as he arrived.

Mr Ellis is the man whose experiences with the church when he complained about abuse by a priest is the subject of the hearing by the Royal Commission into Institutional Responses to Child Sexual Abuse.

The hearing is now in its third week.