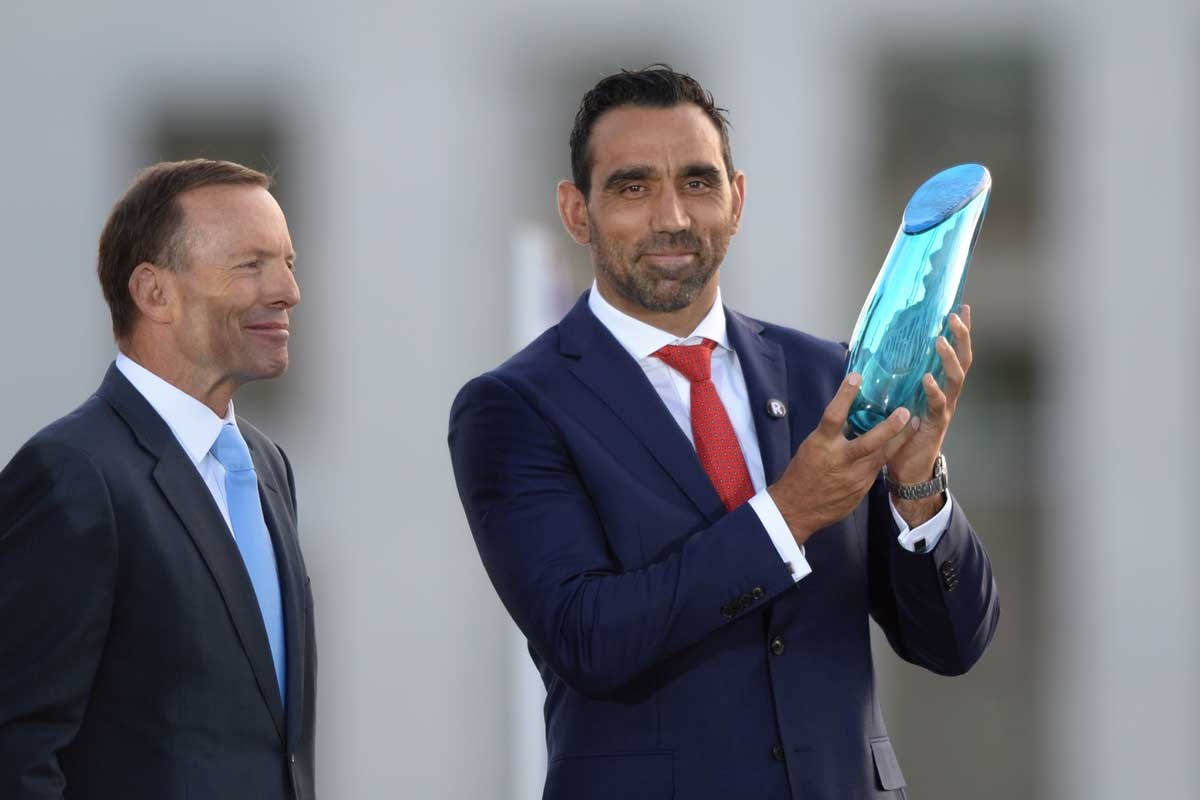 Aboriginal AFL player and anti-racism campaigner Adam Goodes has been named the 2014 Australian of the Year.

Prime Minister Tony Abbott presented Mr Goodes with the award at a ceremony on the lawns outside Parliament House attended by a large crowd of dignitaries and fellow award finalists.

Mr Goodes, known for his youth advocacy work, was chosen from a diverse field of nominees representing the scientific and medical communities, the arts and community groups.

At a Parliament House reception on Saturday morning, Mr Abbott described them as representing the very best of Australia and indicative of the nation’s diversity.

“We have an amazing range of extraordinary, dedicated, committed, passionate, achieving people here in this courtyard this morning,” he said.

“Where else could you find an award where finalists include footballers, ballet dancers, cancer researchers, singers and songwriters?

The Australian of the Year Award recipients were selected from more than 3000 nominations submitted by the public.

According to the National Australia Day Council, Mr Goodes was chosen “for his leadership and advocacy in the fight against racism both on the sporting field and within society – a stance which has won him the admiration and respect of people around Australia”.

National Australia Day Council chair Adam Gilchrist paid tribute to the finalists as “an extraordinary group of Australians who represent their States and Territory with distinction and who show us all what is possible in our country”.

He added: “In Adam, Fred, Jacqueline and Tim we have fellow Australians who live their values every day, who have achieved great success and also use their success to help others and make a difference. They inspire us to be better Australians and their contributions make Australia a better place to live.”

Goodes making a difference for his people and youths

The 34-year-old Andyamathanha man is also a four-time All-Australian, member of the Indigenous Team of the Century, and has represented Australia in the International Rules Series.

However, he is also seeking to make a difference for his people, particularly troubled youths, with whom he has worked in detention centres.

He runs a foundation with his cousin and former teammate Michael O’Loughlin which aims to assist young girls and boys to get an education and a job, and also promotes healthy lifestyles.

In 2013, Mr Goodes won recognition for his stance against racism after a “hurtful” incident at an AFL game where a Collingwood supporter – a 13-year-old girl – called him an “ape”.

It was closely followed by insulting comments by Collingwood president Eddie McGuire.

There were apologies and frenzied discussions within the AFL about attitudes towards race.

“It’d be nice to think it was the last incident but people make mistakes,” Mr Goodes said.

A lifetime dedicated to reconciliation

In being named Senior Australian of the Year, Mr Chaney, 72, was recognised “for his commitment to reconciliation and human rights”, the Council said.

A founding co-chair of Reconciliation Australia, which promotes ties between Aboriginal and Torres Strait Islander peoples and the broader Australian community, Mr Chaney was an early advocate for Aboriginal voting rights in 1961.

He was also instrumental in the 1967 referendum that saw more then 90 per cent of eligible Australians vote “yes” to count Aboriginal and Torres Strait Islander Australians in the national census and to give the Commonwealth Government power to make specific laws for Indigenous people.

The former lawyer entered the Senate in 1974 and went on to become Federal Minister for Aboriginal Affairs.

Among his other achievements are the establishment of the Aboriginal Legal Service of Western Australia and the Graham (Polly) Farmer Foundation, which supports Indigenous young people to reach their potential.

The Australia Day Council said Mr Chaney’s long history of public service was “rooted in his fierce commitment to social justice and a belief in the inherent equality of people”.

“In all his leadership roles, Fred inspires others to work collaboratively, respectfully and ambitiously to overcome the barriers that inhibit people’s full economic and social participation in Australian society.”

Just a girl who loved to swim

Young Australian of the Year Jacqueline Freney won eight gold medals at the 2012 Paralympics in London, becoming Australia’s most successful Paralympian at a single Games.

The 21-year-old swimmer won a gold medal for every event in which she competed, and her gold medal haul was greater than any other competitor from any country.

Two of her performances were under world record time, with her success earning her the title of Australia’s 2012 Paralympian of the Year.

According to the Council, Ms Freney’s success and “indomitable spirit” were not, however, confined to the swimming pool.

Working with Swimming Australia as a motivational speaker to help other people with disabilities reach their potential, Ms Freney has become “an inspirational role model and positive proof that, with hard work and determination, anything is possible,” the Council said.

Describing the award as her proudest moment as an Australian, Ms Feeney thanked her supporters and said she hoped her experience could inspire others.

“With all of you behind me, I was able to achieve anything and everything, but please understand I’m just a girl who has strived to be the best at what I can be at what I love, swimming,” she said.

“I ask that all Australians respect each other’s diversity and acknowledge their ability to contribute to this great country.

“I truly hope that through my sporting achievements I inspire other young Aussies to follow their dreams, and if I can spark a dream in a special child’s heart and give hope to their family, I will have achieved my greatest award.”

Helping sick kids when they need it most

Tim Conolan, of Melbourne, established the charity TLC in 1988 to help children in hospital and undergoing medical treatment, and through the organisation now helps more than four million sick children and their families, earning him the title of Australia’s Local Hero.

Mr Conolan set up the charity with his long-term partner, Ana, after attending a cancer support group camp as a motivational speaker, using what the Council described as his ” passion and an infectious positivity”.

“Tim’s mission is to ensure every child in every hospital in Australia has the emotional and practical support they need,” the Council said.