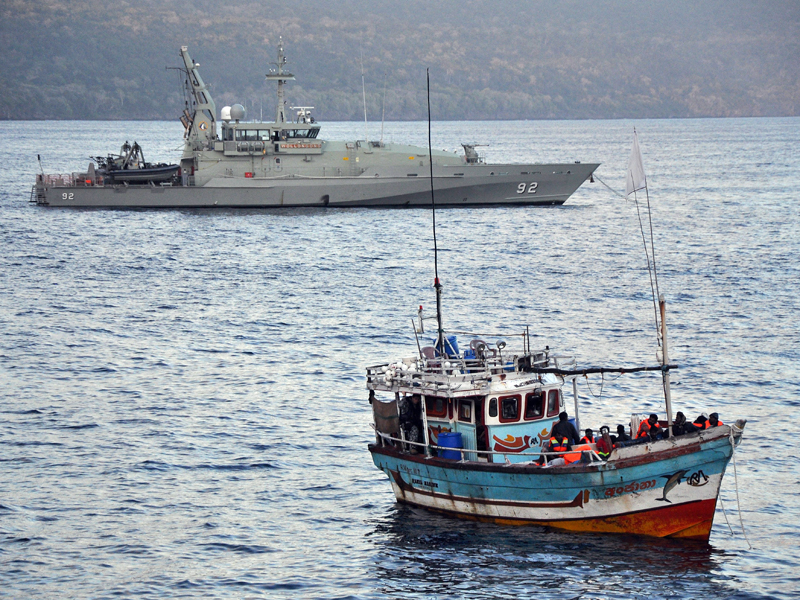 Video footage has emerged of asylum seekers receiving medical treatment in Indonesia for burns they allege were inflicted during a recent boat tow-back operation to Rote Island.

Indonesian police had to seek medical treatment for seven people with burns on their hands after the navy allegedly forced the asylum seekers to hold on to hot pipes on the boat’s engine, the ABC reported.

Navy chief Vice Admiral Ray Griggs took to Twitter on Wednesday to dispute the claims of mistreatment by navy personnel.

“Based on everything I know there is no basis to these allegations – none,” he tweeted.

Immigration Minister Scott Morrison also dismissed the claims and accepted assurances about the conduct of Customs and Defence personnel.

He said people smugglers and their clients had high motivation to “spin stories in order to undermine” Australia’s border protection policies.

“The Australian government is not going to put up with people sledging the Australian navy with unsubstantiated claims,” Mr Morrison told reporters in Sydney.

“I think the mere publication of things that are clearly so unsubstantiated is very unfortunate.”

Mr Morrison would not confirm whether the tow-back operation was filmed by Defence.

But he praised the “extremely tough job” of navy and Customs personnel.

Meanwhile, Mr Morrison has been in contact with Australia’s High Commissioner for Nauru to seek clarification about the legal limbo surrounding the cases of 100 asylum seekers accused of rioting in 2013.

The Pacific nation has sacked its chief justice and only magistrate, both Australian citizens.

“I want to be comfortable and satisfied about (the process) … I’m still waiting for a response,” he said.

The issue was a matter for Nauru’s government and it was not for the Australian government to dictate a resolution, Mr Morrison said.

Overnight, Customs and Defence released the terms of reference for an internal review investigating the entry of Australian vessels into Indonesian waters as part of Operation Sovereign Borders.

Customs chief executive Michael Pezzullo told reporters he asked the panel to report back on February 10.

It is unclear whether the report or sections of the report will be released publicly.

Australia has received a dressing-down in the 2014 Human Rights Watch report that accused successive governments of demonising asylum seekers trying to reach the country by boat.

The St Vincent de Paul Society national council says it is shocked and ashamed by Australia’s inhumanity towards people who have every right to seek asylum here.

“We are not at war with asylum seekers. People seeking protection in our country are not the enemy.”