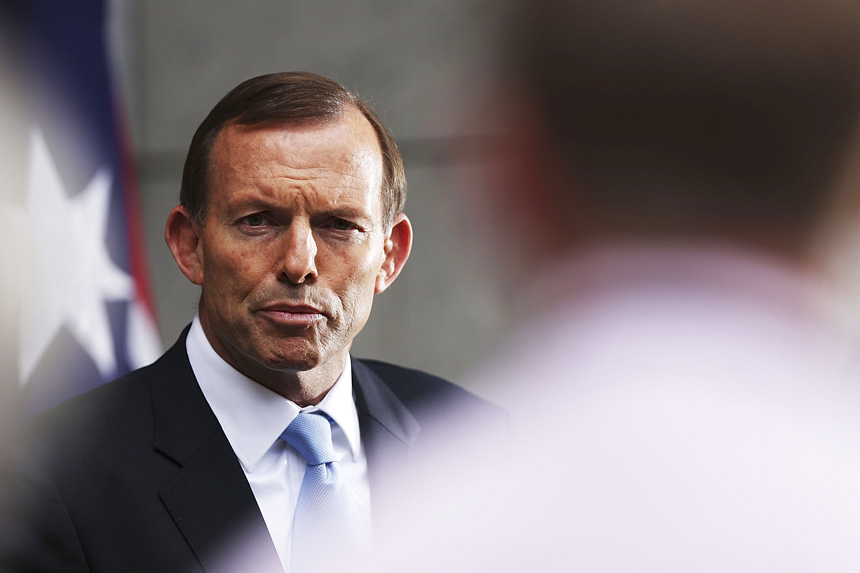 “My friends, my friends,” Prime Minister-elect Tony Abbott said to a room of supporters late on 7 September, 2013, “I can inform you that the government of Australia has changed for just the seventh time in 60 years.”

When the cheering died down Mr Abbott carefully outlined the character of the government he would lead. It would “say what it means and mean what it says”. It would be a government “of no surprises and no excuses” and one that “understands the limits of power as well as its potential”.

One hundred days later, Mr Abbott says his government has been true to its word.

But it is also true that the Coalition has battled problems that Mr Abbott did not foresee amid the post-election celebrations, including a bruising argument with Indonesia over spying activities and a backlash over plans to abandon a new school funding model devised by Labor.

How have you seen it? Here, we take a look at the major election promises, what has transpired since the Coalition was voted into power and give you a chance to rate the performance of the new government 100 days in.

In a speech on Sunday, Mr Abbott claimed his boats policy had reduced arrivals since the election by 80 per cent. While there have been successes with the policy, there have also been difficulties, including the withdrawal of support by Indonesia after a damaging spying scandal and the failed plan for a boat buy-back scheme.

Prior to the election, the Coalition promised to establish Operation Sovereign Borders, which it did, and according to this document, reintroduce temporary protection visas (TPVs), which it tried to do but was thwarted in the senate.

It solved the problem by capping the number of onshore permanent protection visas allowed during the current financial year at 1650, the number which had been granted at the time Mr Abbott’s team was sworn in. This denied permanent residence to any of the people currently in detention in Australia and, he says, “honours the government’s commitment to the Australian people”.

During the election campaign Mr Abbott said the Coalition was on a “unity ticket” with Labor on education funding, or the so-called Gonski reform package that the ALP had painstakingly negotiated with some of the states. But in late November, Education Minister Chris Pyne announced he would ditch the funding model after 2014, describing it as a “shambles”.

“I’m committed to the same funding envelope as the previous government. But what I’m not going to proceed with is a school funding model that is inequitable and utterly incomprehensible,” said Mr Pyne.

But a few days later, after a fierce backlash, the PM and his education minister held a joint conference to announce they would, in fact, honour the original deal struck with some of the states, and had found an additional $1.2 billion to add to the pot.

Repealing the carbon and mining taxes were two of the major planks in the Coalition’s electoral platform not only during the campaign but throughout the last parliament. True to his word, Mr Abbott moved swiftly to introduce the repeal legislation which passed the lower house, where the government has the numbers, but was then voted down in the senate.

A new senate will sit next July giving the government the chance to negotiate the passage of the bills. While the introduction of the bills partially satisfies the original promise, fully realising it will take until at least the middle of 2014.

Mr Abbott promised to establish a Commission of Audit to “identify waste and remove duplication”, find areas where “Commonwealth involvement was not necessary” and “improve the overall efficiency of government services”. The new government swiftly established the Commission, with the first part of its report due by the end of January and the final part due at the end of March.

The job of getting the federal budget back into surplus is proving more difficult. In his victory speech, Mr Abbott said: “The budget will be on track for a believable surplus.” In late October, seven weeks after coming to power, Mr Abbott remained confident that he could deliver a surplus on Labor’s original timeline.

But as recently as Monday, the day before the Mid-Year Fiscal and Economic Outlook was due, Mr Abbott publicly abandoned hopes of getting the budget back into the black in four years and blamed the former government’s “profligacy”. Countering the assessment, Shadow Treasurer Chris Bowen said it was the new government’s responsibility and they had “made it much much worse”.

In fact, the government now says the deficit could blow out from about $30 billion to as much as $50 billion.

Tomorrow marks our 1st 100 days in Govt. Here’s how the Govt is keeping its commitments to you http://t.co/nxIbeYuYKs

While those were the major election promises, there have been other tense moments over the first 100 days.

One being, Mr Abbott installed only one woman to his cabinet – Deputy Leader and Foreign Minister Julie Bishop.

Another being, a second diplomatic row erupted when the government criticised a decision by China to expand its air defence zone.

And finally, Holden’s decision to call an end to car-making in Australia at the cost of 3000 direct jobs and possibly many more at businesses which supply the car industry. While some blamed the government, Holden did not, pointing to a “perfect storm of negative influences” including the high Australian dollar.

What do you think? Is Mr Abbott accurate in his assessment of the new government’s first 100 days? Has it lived up to your expectations? What issues are you watching closely?

Leave a comment below with your views of the first 100 days of the new government.

How do you rate Tony Abbott’s first 100 days?