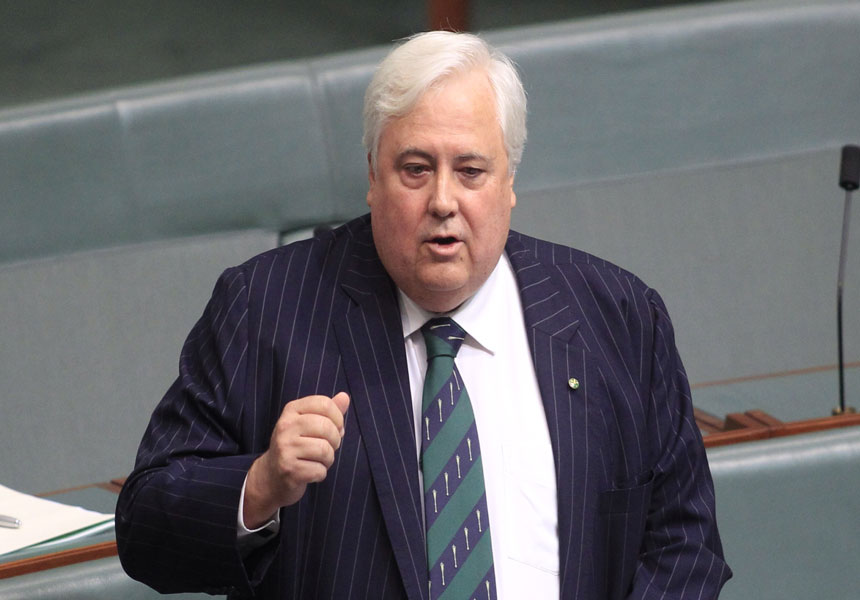 In a blustery first speech to parliament that finished five minutes under time, the member for Fairfax spoke with his usual breathlessness but sounded uncharacteristically shaky.

“Australia needs a revolution in the way we think, in the way we boost our wealth and economy for all our citizens,” the millionaire businessman from Queensland told the chamber on Monday.

“Australians have lost hope in the future. Change is certain.”

Prime Minister Tony Abbott and most of his government’s frontbench were absent as Mr Palmer presented his credentials, including that his party outpolled the Nationals at the September election.

He sent a message to those who thought backing his party signified a wasted vote: “now our party vote has solidified”.

There was a swipe at the Australian Electoral Commission for losing ballot papers, costing his party an upper house position and sparking a second senate poll in Western Australia.

And a general criticism of party politics.

“The entrenchment of the two party system in this country not only threatens democracy, it destroys the creativity of the nation,” Mr Palmer said.

It “robs from all of us the benefit of each other’s ideas and innovation”.

When it came to driving growth and increasing government revenue, Mr Palmer squeezed it into a paragraph, championing his idea of annual tax payments for companies which will channel billions of dollars back into the economy.

With no mention of his business ventures – which include a dinosaur park and plans to rebuild the Titanic – Mr Palmer flew a flag for regional Australia, slating the reintroduction of a zonal taxation system, and the need to boost the number of professionals in rural areas.

“We have to end the discrimination against rural industries allowing them to compete.”

“Our main concern needs to rest with how we can grow and expand our economy and create more wealth. Not wealth for the wealthy, but for all, even the least among us,” he said.

Parliamentarians are charged with being the “last sentry at the gate” to protect Australians and their rights, Mr Palmer said.

‘We need a revolution’: Clive Palmer’s vision for Australia