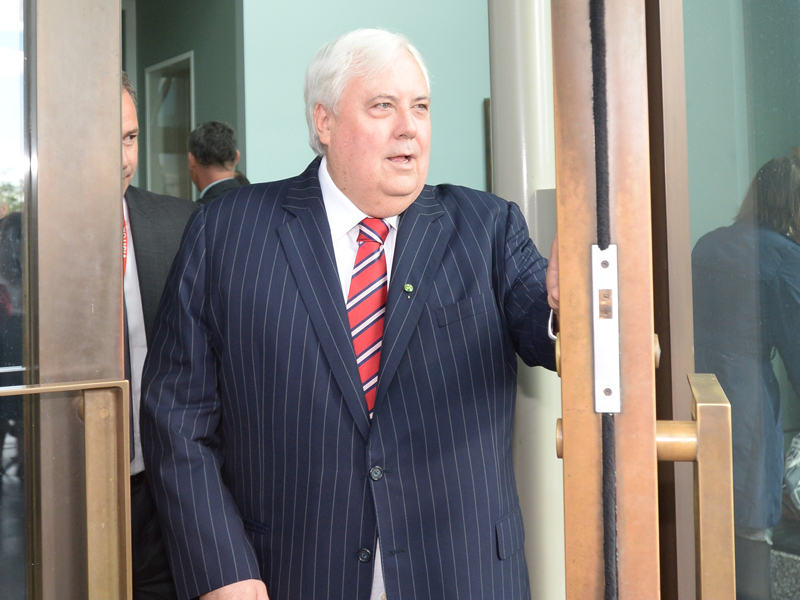 Clive Palmer declared himself a full-time politician as he arrived for his first day of parliament.

Businessman Clive Palmer has promised to be a full-time MP, sniped at media magnate Rupert Murdoch and channelled former US President John F Kennedy to urge better pay for journalists.

Mr Palmer says he’ll put his business interests aside to represent voters after his surprise win in the Queensland seat of Fairfax, making him the lone Palmer United Party (PUP) member in parliament’s lower house.

I’m … fully retired from business, one hundred per cent politician. That’s all I’m doing. Nothing else.

But Mr Palmer refused to commit to attend every sitting of parliament, declaring MPs lose touch with their voters when they are forced to live half the year in Canberra.

“I’m not going to commit to sit in a box and do nothing,” Mr Palmer said, adding he would not be a part-time politician.

“I’m full-time. Fully retired from business, one hundred per cent politician. That’s all I’m doing. Nothing else.”

Shortly after he was sworn in as an MP, Mr Palmer gave a speech at the National Press Club, where he outlined his political powerbase and plans to run candidates at state elections in Victoria and Tasmania.

He said his own polling showed the PUP could win two seats in a likely re-run of the Senate vote in Western Australia, giving him a voting alliance of up to five votes with the support of Victorian Motoring Enthusiast Party Senator Ricky Muir.

That would give Mr Palmer the ability to block or support government legislation in the Senate.

Wayne Dropulich, the West Australian Senator-elect for the Australian Sports Party, was also at Mr Palmer’s speech, and later told AAP the event was the first time he had spoken to Mr Palmer. Both men denied any talks about Mr Dropulich joining the PUP Senate voting alliance.

Mr Palmer said he had not spoken recently to Prime Minister Tony Abbott.

But he would abstain from voting on the abolition of the carbon tax to keep his party’s plans secret until the legislation comes before the Senate.

Mr Abbott said he would give Mr Palmer “the courtesy and consideration” that all members of parliament deserve.

It was a busy day for the self-declared billionaire, who pleaded for a stronger media in Australia, using comments eerily similar to those used by President Kennedy in a 1961 speech about how Karl Marx was repeatedly denied a pay rise, prompting him to write his communist manifesto with Frederick Engels.

“If only Marx had remained a foreign correspondent, the world might be a different place and the 20th century wouldn’t have had so much suffering,” Mr Palmer said as he pleaded with Mr Murdoch to boost the salaries of his Australian journalists.

Mr Palmer has made no secret of his disdain for Mr Murdoch’s The Australian newspaper and its reporting on him, rejecting a story suggesting he was a “tyrannical bully”.

He responded by criticising Mr Murdoch, a US citizen, as a bully who should not be allowed to dictate the policies of his Australian newspapers.

“I resent the fact that anyone with a foreign nationality can come over here and can sack an editor of a major paper, lay the law down as a bully to a whole lot of Australian journalists,” he said.

Clive Palmer channels JFK on day one in Canberra