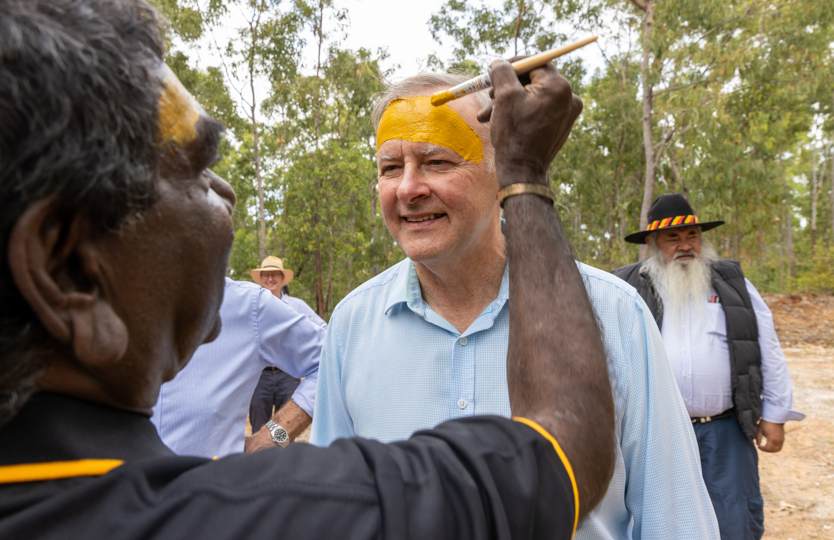 Anthony Albanese will meet Indigenous elders on a visit to the Torres Strait. Photo: Getty

Pledging his undivided support for adding an Indigenous Voice in the Constitution, Prime Minister Anthony Albanese has told Indigenous leaders he will be with them every step of the way as Australia prepares to write a new chapter in its history.

At a moving ceremony to open the Northern Territory’s Garma Festival on Friday, Mr Albanese said Australians should “cherish” and celebrate its Aboriginal and Torres Strait Islander culture.

“We should recognise it in our national birth certificate, the Constitution of Australia,” he said to cheers and applause from the crowd of about 600 people.

“My government will be taking up your generous offer of the Uluru Statement to walk with First Nations people towards reconciliation, to take that journey.

“To accept the generous and gracious offer, which is beyond what could have been reasonably expected given the history of this great island continent since 1788.”

Referendum in the air

Mr Albanese is scheduled to make a keynote speech to the festival on Saturday, with many hoping he will reveal further plans for the path to a referendum for recognition in the constitution and a Voice to parliament.

He was escorted into the ceremony by Yothu Yindi board member Djaawa Yunupingu after a men’s ceremony out of sight, where the Prime Minister’s forehead was painted yellow.

The four-day festival is a celebration of the Yolngu people’s cultural, artistic and ceremonial traditions drawing about 2000 guests, including Minister for Indigenous Australians Linda Burney.

Held in Gulkula, a significant ceremonial site on the Gove Peninsula, the gathering also provides a platform for the government, corporate and not-for-profit sectors to engage with First Nations people.

More than a thousand attendees have already arrived at the massive tent-covered site looking over the ocean from deep within a stringybark forest, including US Ambassador Caroline Kennedy.

She told the crowd the US was very interested in the momentum that was building for an Indigenous Voice to be enshrined in the constitution.

“I have learned so much. Thank you for your hospitality and your inspiration,” she said in a short speech after dozens of Yolngu dancers had performed for the crowd.

‘The time is right’

Attorney-General Mark Dreyfus is also attending, along with Senator Patrick Dodson, the Special Envoy for Reconciliation and the Implementation of the Uluru Statement.

Senator Malarndirri McCarthy and three Uluru Statement leaders are also at the gathering, as is federal opposition spokesman for Indigenous Affairs Julian Leeser.

After the ceremony, dozens of Yolngu dancers escorted Mr Albanese and other leaders to the bungul (ceremony site) in an energetic display of their culture, where the celebrations continued.

Earlier, Uluru Statement from the Heart leader Wiradjuri man Geoff Scott warned Australia it must not miss the opportunity for a Voice to parliament because it may not return for another generation.

“It has been something that’s been developing over 30 years and the time is right now for change, momentum is building,” he said.

Mr Scott said a Voice to parliament would help Indigenous people focus on closing the gap, and every Australian should want that.

“We do not want to lose another generation. That is what the Voice is about,” he said.

This year’s festival will be the 22nd gathering after a two-year hiatus due to fears of spreading COVID-19 to vulnerable Indigenous communities.

If Labor is serious about electric vehicles, fixing the fringe-benefits tax is the next step
David Pocock denied use of Auslan interpreter for his maiden Senate speech
Today's Stories

Anthony Albanese: We will ‘walk with you’ to get an Indigenous Voice to parliament