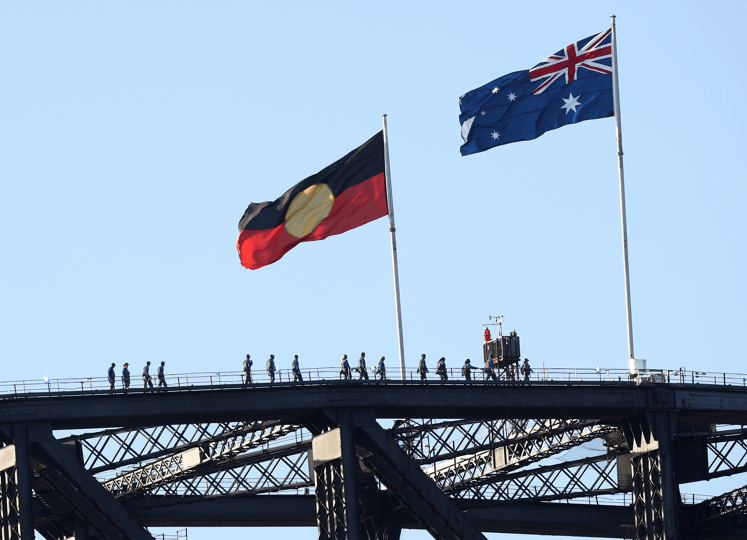 More than 224 years after the First Fleet’s arrival in Sydney Cove signalled the end of Indigenous sovereignty, the Aboriginal flag will have a permanent place of honour atop the Harbour Bridge.

The iconic flag of the world’s oldest continuous culture will be raised “as soon as possible”, NSW Premier Dominic Perrottet told reporters in Sydney on Saturday.

“I’ll climb up there and and put it up myself if I need to.”

The Premier said the first advice he’d received on the reconciliation gesture was that it would take two years to make good, something he felt was excessive considering the bridge itself was built in nine years.

He said the initiative was part of a new holistic government approach to acknowledging Indigenous Australians in NSW that would include the remediation of Sydney’s Goat Island and its return to Aboriginal ownership.

“Part of the change we are looking at today is empowering all ministers to have buy-in to that responsibility. There are many issues that go right across the board, across different departments,” Mr Perrottet pledged.

“If we all work together and have a key focus, I want all our ministers to be minister for Aboriginal affairs in their own right.

“We can’t truly be proud of our country unless we are working together to achieve true reconciliation,” Mr Perrottet said.

The premier said it was important to engender a deeper understanding of Indigenous culture, something he said had been lacking and as such, was “a travesty”.

NSW Labor welcomed the decision on the flag’s installation on the iconic “Coat Hanger” but said actions ultimately spoke louder than words.

“I hope the new premier actually follows through on his commitments and we’re not just seeing more platitudes and empty promises,” spokesman for Aboriginal affairs David Harris said in a statement.

He said the opposition had also been calling for the return of Goat Island to its rightful owners since 2015.