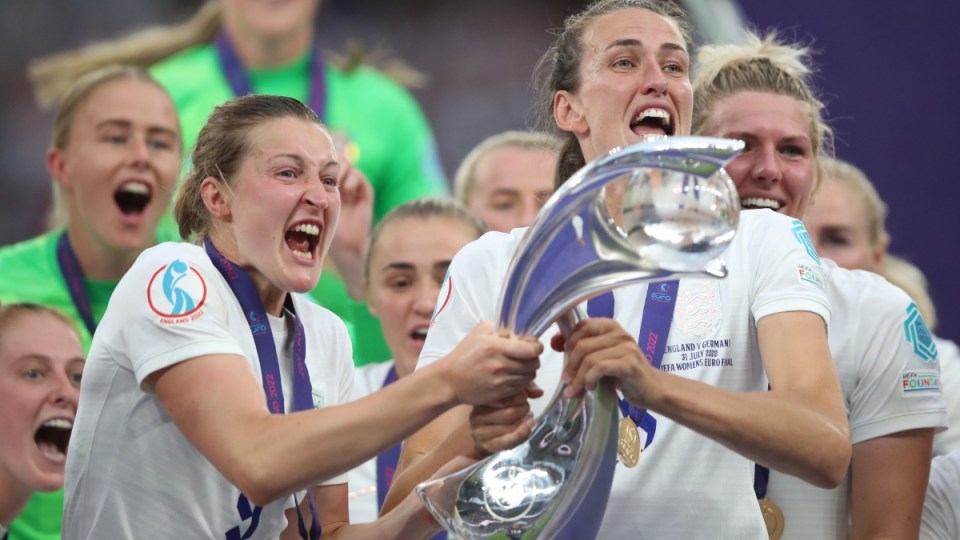 It was just one of many wild scenes after England’s Euro 2022 dream became a reality when the team secured the first major trophy in its history in front of a record-breaking crowd at Wembley Stadium.

There was jubilation at the final whistle on Sunday night (Australian time) as the Lionesses tried to take in what they had done amid an almighty roar from the 87,192 crowd – a record attendance for any Euros match, men’s or women’s.

“I just can’t stop crying. We talk, we talk and we talk and we finally done it. You know what, the kids are alright. This is the proudest moment of my life,” England captain Leah Williamson said.

“Listen the legacy of this tournament is the change in society. The legacy of this team is winners and that is the journey. I love every single one of you, I’m so proud to be English. I’m trying so hard not to swear.”

A year on from the men’s team losing their Euros final at the stadium on penalties to Italy, England can celebrate the first piece of major silverware for a senior side since the men’s 1966 World Cup triumph over West Germany.

For Sarina Wiegman, it was back-to-back Euro successes after overseeing the Netherlands’ triumph on home soil in 2017. Her record in charge of England after taking up her post last September has been near-flawless – 20 games, no defeats, 18 wins, 106 goals scored and only five conceded.

It was a third appearance in a Euros final for the team, and first since losing 6-2 to Germany at Euro 2009 in Finland.

She waited only for confirmation of the goal before taking off her shirt and waving it around her head, while being lifted by her teammates in a moment of pure elation.

Eight-time champion Germany – which had lost star forward Alexandra Popp to injury in the warm-up – equalised with 11 minutes of normal time remaining through Lina Magull. From there, the game looked on course for a penalty shootout until Kelly’s effort fired Wiegman’s side to glory.

The English women’s game has been on a journey of considerable growth in recent years, with the sense of momentum certainly apparent in the past few weeks as the Lionesses have thrilled large stadium crowds and television audiences – and there will be sky-high hopes for what the future holds after Sunday’s historic moment.

When she could finally speak at her post-match press conference, Wiegman said the team had changed society with its win.

“I think we really made a change. I think this tournament has done so much for the game but also for society and women in society in England but I also think in Europe and across the world and I hope that will make a [bigger] change too,” she said.

“It’s really, really nice to see what we saw today when we came into the stadium how enthusiastic everyone was and how the fans have stood behind us.”

There was also a personal triumph for Beth Mead, who claimed the Golden Boot after finishing the tournament with six goals. It was the same total as Popp, but Mead took the prize due to her superior assists tally.

“I am speechless. I’m in shock. I’ve just had a good cry with the family, I wouldn’t be here without them,” 27-year-old Mead said.