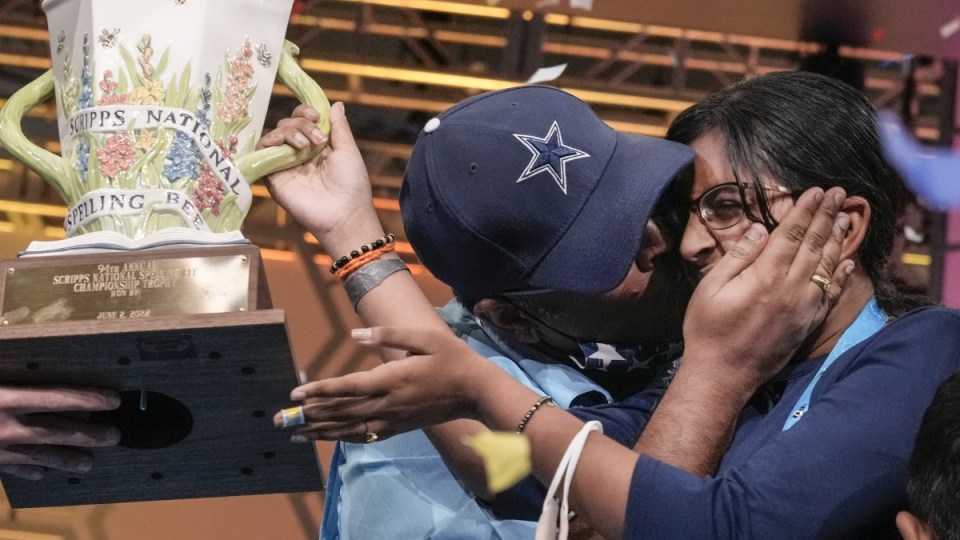 Harini Logan is embraced by family after finally taking the US national spelling title. Photo: Getty

Texas teen Harini Logan has won the Scripps National Spelling Bee after a “spell-off” was required for the first time for a champion to emerge in the extremely close competition.

Harini takes home $US50,000 ($A69,000), plus further money prizes and reference works from Merriam-Webster and Encyclopaedia Britannica.

The 14-year-old from San Antonio beat Vikram Raju, 12, of Denver – but only after their neck-and-neck competition required a “spell-off” to decide the winner, a first in the history of the US competition.

This year’s competition was held at National Harbour, Maryland, just outside Washington, DC.

Harini, who waited for her turn in a sound-proof area, emerged to spell 21 words correctly of the 26 she attempted.

Both had the same list of words read to them, ringing a bell to signal they were ready to advance to the next word.

Contestants were aged from seven to 12 and were required to test negative for COVID-19 to take part. They were masked onstage except when actively competing.

Harini is an eighth-grade student at The Montessori School of San Antonio. She loves creative writing and plans to publish a book in high school. When she’s not spelling, she plays piano, recorder and is learning the ukulele.

This was her fourth and final year as a bee contender.

Last year, when Zaila Avant-garde, 14, from New Orleans correctly spelled “Murraya”, a genus of plants, she became the first African American to win the prestigious competition that began in 1925.

After 27 years of being broadcast live on ESPN, this year’s live show was moved to ION and Bounce, which are owned by a Scripps subsidiary. The show’s host was actor LeVar Burton.