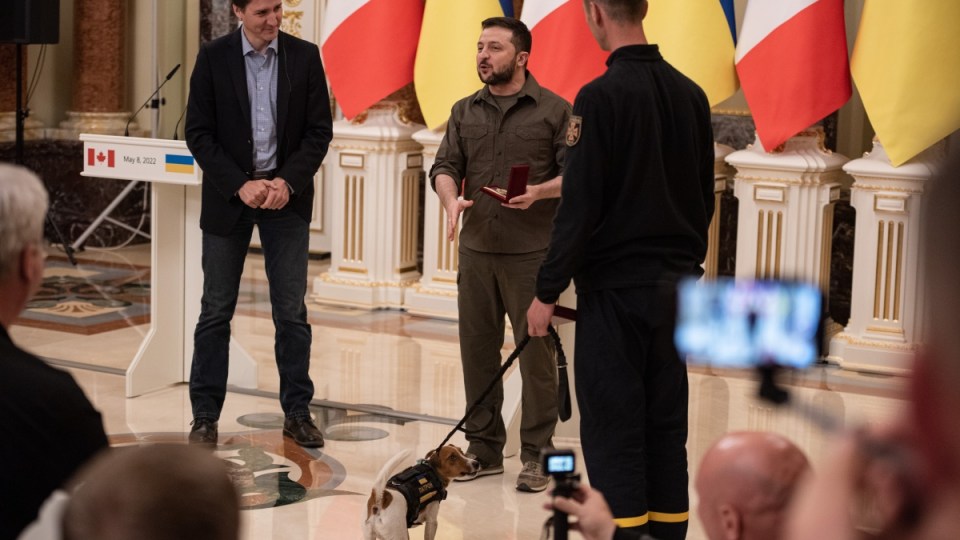 President Volodymyr Zelensky has presented Ukraine’s famous mine-sniffing dog Patron and his owner with a medal to recognise their dedicated service since Russia’s invasion.

The pint-size Jack Russell terrier has been credited with detecting more than 200 explosives and preventing their detonation since the start of the war on February 24, quickly becoming a canine symbol of Ukrainian patriotism.

Mr Zelensky made the award at a news conference in Kyiv with Canadian Prime Minister Justin Trudeau. Mr Trudeau made a surprise visit to the Ukrainian capital on Sunday.

In a video posted on Telegram by the State Emergency Service of Ukraine, Patron barked and wagged his tail, prompting laughter from the audience, while Mr Trudeau patted his pockets as though looking for a dog treat.

“Today, I want to award those Ukrainian heroes who are already clearing our land of mines,” Mr Zelensky said in a statement after the ceremony.

“And together with our heroes, a wonderful little sapper – Patron – who helps not only to neutralise explosives, but also to teach our children the necessary safety rules in areas where there is a mine threat.”

In a tweet on April 21, Ukraine’s Ministry of Foreign Affairs said Patron was a service dog in the city of Chernihiv.

“He has discovered over 150 explosive devices in Ukraine since full scale Russian invasion began. Patron works closely with deminers to make Ukrainian cities safe again. Thank you so much for your service!” it said.

On May 1, Ukraine’s Centre for Strategic Communications and Information Security posted a video of Patron digging for explosives.

“Patron the dog keeps working hard – just yesterday, he helped defuse 262 items of explosive ordnance near Chernihiv. We are very proud of our very good boy,” it said.

Other videos show Patron on goodwill visits to injured children in Ukrainian hospitals – doing “charity work in his spare time”.

Small wonder then, that he apparently napped through much of Saturday’s media briefing at which his award was announced.

The award also went to Patron’s handler, a major in the Civil Protection Service, Myhailo Iliev.