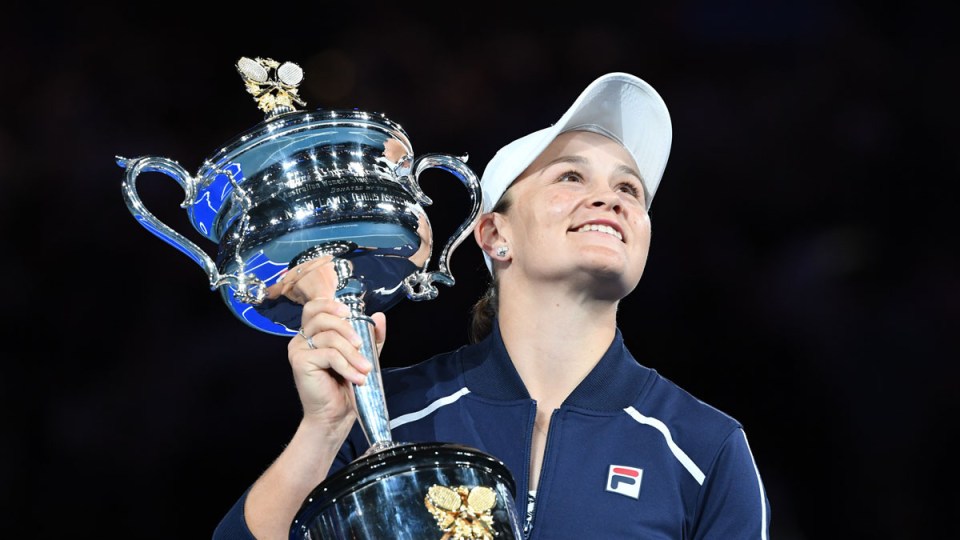 Ash Barty lifting the Daphne Akhurst Memorial Cup was a no-brainer selection for our favourite video of the week.

What a week it has been for Australian sport – with plenty of iconic moments captured in video format.

Of course, Aussie golden girl Ash Barty’s historic Australian Open victory made it straight to the top of our list of videos this week.

Special mention also to the new official G.O.A.T (Greatest Of All Time) Rafael Nadal, who snared a record-breaking 21st grand slam title at this year’s tournament.

Join us in reliving these incredible moments below. Plus, check out the other videos that made TND reporters grin – including heartwarming gestures and canine calamity.

Have a video you would like us to include for next week? Make sure you tag us on social media at #TNDVoW.

To add to the tear-jerking moment, Barty’s mentor and four-time Australian Open champion Evonne Goolagong Cawley was there to hand her the Daphne Akhurst Memorial Cup.

Barty is the first Australian woman to win the title in 44 years.

Swipe to see the special moment below.

Both Kyrgios and Kokkinakis bowed out of the men’s singles tournament disappointingly early – but found a surprising second wind with their doubles efforts.

The pair are the first all-Aussie pairing to take out the tournament since ‘The Woodies’ (Todd Woodbridge and Mark Woodforde) in 1997.

What an evening for Australian sport.

We just had to include the moment Rafael Nadal secured his 21st grand slam title at this year’s tournament.

What makes 21 so special, you may be thinking?

Nadal’s rivals, Novak Djokovic and Roger Federer, both have 20 grand slam titles to their names.

Nadal now has that sweet edge over the pair, officially making him the greatest tennis player of all time.

Swipe below to watch Nadal celebrate the historic moment.

Just like the tennis stars that faced the sizzling Melbourne heat this year (even Nadal battled heatstroke), this cat needed his hydration.

We’re not sure how effective this method was, but it’s certainly amusing to watch.

This adoring dog owner was caught singing ABBA’s Dancing Queen – complete with a couple of air kisses to his pooch.

The pup looked to be captivated by the passionate rendition.

Allow this video of a girl covering her dog’s ears during Lunar New Year celebrations to warm the cockles of your heart.

This little guy was just bursting with emotion over his newborn sister.

Our hearts can barely handle it.

There’s nothing like a very traditional lion dance to get you in the spirit of the Lunar New Year … especially if a cat is beneath the costume.

Fish are friends not food (not)

Talk about a mouthful …

Sometimes lions frolic on the beach, too.

Question: Would you rather swim beside a shark or a lion …? I think we’d pick the swimming pool in this case.

This pup is very enthusiastic about earning his treats, so much so that laying down means landing with a thump on the ground in superman position.