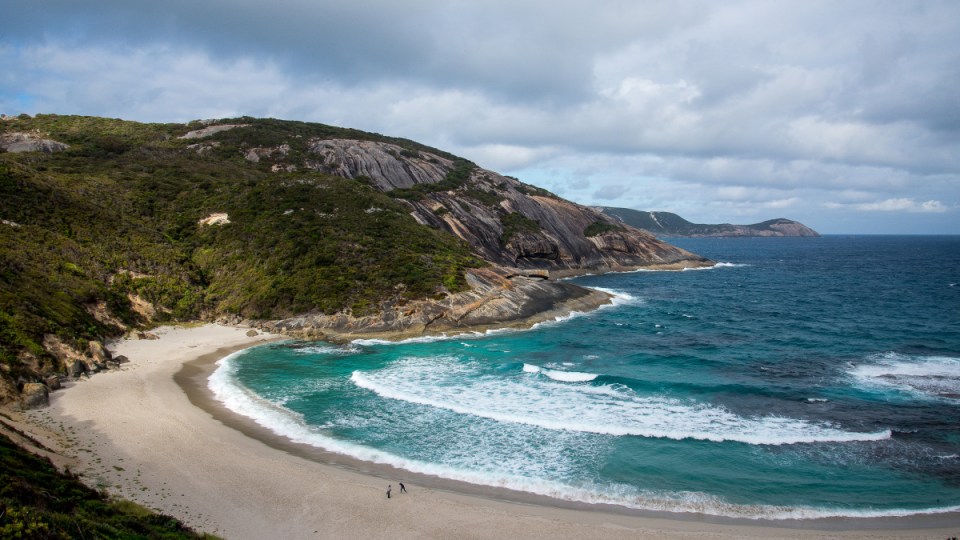 Misery Beach was once known for its brutality, but is now the country's No.1 beach beauty spot. Photo: Getty

Bondi might have the glamour, Byron the celebrities and Noosa the tranquility, but a tiny stretch of sand with a bloody past has beaten all  three, and 19 others, to be crowned Australia’s best beach.

Misery Beach, near Albany in Western Australia, used to be stained red with the blood of slaughtered sperm whales.

But since the closure of Australia’s last whaling station 44 years ago it has become a haven for seals, whales and dolphins.

The 200-metre beach five hours south-east of Perth was named the country’s best on Sunday in a list compiled by Tourism Australia’s beach ambassador Brad Farmer.

Tourism Minister Dan Tehan said Mr Farmer had “one of the toughest jobs in Australia”, narrowing down more than 11,000 candidates to curate a selection of “our most spectacular beaches that will inspire and excite holiday makers all over Australia and the world”.

Mr Tehan encouraged local holiday makers and international tourists alike to include as many as possible on their itineraries as Australia reopens.

Don’t be fooled by the name. With its aqua blue water and cascading rock face, Misery Beach is anything but a bad time.

This coastal bay is sheltered by surrounding pine trees, making it the perfect spot for a summer day’s swim with the family.

Formed in an unusual crab claw-like formation, The Spit is popular with fishermen, divers and snorkellers alike.

See some of the marine life in action:

Although it may be a bit of a task to get to this remote beach on the Yorke Peninsula (likely requiring a 4WD), the breathtaking views are well worth the effort.

Located in a quiet cove on the Great Ocean Road, Loch Ard Gorge is famous for its remarkable rock formations.

Home to the island’s native wildlife, including fairy penguins, there’s plenty to see and do at this spectacular location.

Tucked away at the back of Hayman Island, this beach is truly the hidden pearl of the Whitsundays.

Majestic gum tree forests surround this serene location, making it the perfect spot to chill out and relax.

This one’s for the outdoor adventurers. With plenty of fishing hotspots and 4WD tracks to explore, you won’t be short of activities when visiting Dundee Beach.

Looking for some peace and quiet? Dudley Beach is a rarely-crowded beach in Newcastle, perfect for a beachside stroll.

Thompsons Beach, unlike the other beaches on this list, sits on the bank of the Murray River in northern Victoria.

Read more about the history of the wreck.

You’ll feel right at nature at Mots Beach, which sits on the edge of a vibrant rainforest. The remote location means visitors are often lucky enough to have the beach to themselves.

Emu Bay, SA: On the northern side of Kangaroo Island

This beach is one of the few on the island with direct vehicle access, making it the perfect spot to set up for a day of fun at the beach and tuck into a feast of fish and chips.

A post shared by Scott, Shona & the Crazies 🇦🇺 (@anotherdayincreation.au)

This swimming hole sits at the foot of sweeping sand dunes and the island’s lush rainforest. Keep an eye out for the 12 species of fish that call the lake home.

Surrounded by a number of spectacular hiking trails, Congwong Beach is the perfect place to cool off after a day in the sun.

Named in honour of its confectionary-shaped waterhole, this lush haven is just an hour’s drive from Sydney.

Rounding off the list is Ethel Beach on Christmas Island.

Although it may be harder to get to than the other locations, as you can see by the stunning jagged rock formations and extraordinary wildlife (notably the Christmas Island red crabs), it’s well worth the travel.

(Indigenous place names, where available, from the Australian Institute of Aboriginal and Torres Strait Islander Studies.)