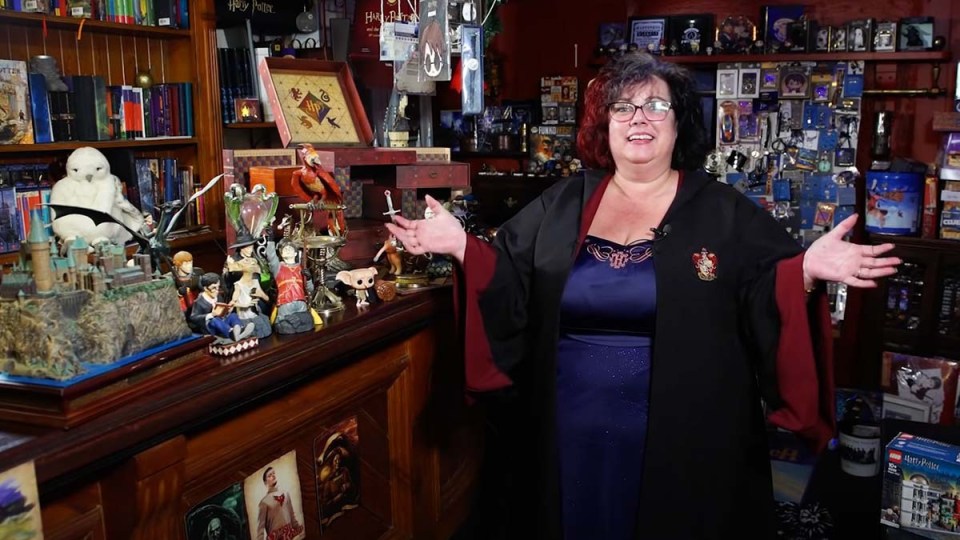 Inside her home, divided into three separate rooms, Ms Nicol-Lewis has stockpiled the world’s largest collection of Harry Potter memorabilia.

OK, so it’s not really a secret.

She began assembling the epic 5284-piece haul in 2002 and said it is not yet complete, despite knocking out the previous record of 2187 pieces.

Among her many, many, many items was a Ron Weasley Pez lolly, until she gave it to Rupert Grint.

The actor is one of 50 cast members she has met since starting the collection.

Ms Maclean gathered 3686 pieces of memorabilia over an 18-year period, according to Guinness World Records.

One of her favourite items is a Pop! Vinyl of Nymphadora Tonks, played by Natalia Tena.

“I love her in the film and in person,” Ms Nicol-Lewis told Guinness World Records.

“I actually cried when I got to meet her. I just love how magical she is. She’s just amazing.”

The superfan said she feels most similar to the character of Ms Tonks because she likes to be different.

Her affinity for wizards has also cast some magic in her love life.

She had a Harry Potter-themed wedding, and said while her husband is not a fan of Harry and co., he lovingly encouraged her to attempt the record.

The collection of Lego, books, stuffed toys and official merchandise is so large they had to move to a bigger house.

Acquiring such a vast number of pieces has definitely been a challenge,  especially without the ‘accio’ summoning spell to help out – at least as far as we know.

Not your average Muggle: This is the world’s largest collection of Harry Potter memorabilia