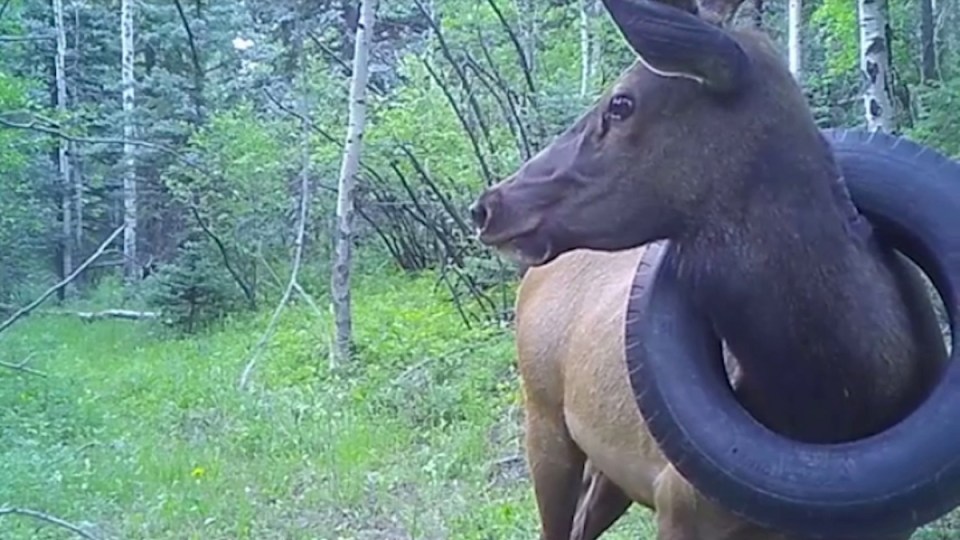 The 270-kilogram elk has wandered a Colorado wilderness area for two years with a tyre stuck round its neck. Photo: Colorado Parks & Wildlife

An elk that has been wandering the wilderness with a car tyre around its neck for at least two years has finally been set free, Colorado Wildlife officials say.

The four-and-a-half-year-old, 270-kilogram bull elk was spotted near Pine Junction, south-west of Denver, on Saturday night (local time) and tranquilised, according to Colorado Parks and Wildlife.

Wildlife officers had to cut off the elk’s five-point antlers to remove the tyre because they could not safely slice through its steel rim.

“We would have preferred to cut the tyre and leave the antlers for his rutting activity, but the situation was dynamic and we had to just get the tyre off in any way possible,” officer Scott Murdoch said.

Murdoch and fellow officer Dawson Swanson estimated the elk shed about 16 kilograms with the removal of the tyre, associated debris and his antlers.

“The pine needles, dirt and other debris basically filled the entire bottom half of the tire. There was probably 10 pounds (4.5 kilograms) of debris in the tire.”

The elk was freed from the tire with minimal injury.

“There was one small open wound maybe the size of a nickel or quarter, but other than that it looked really good,” said Mr Murdoch.

“I was actually quite shocked to see how good it looked.”

The officers have searched for the elk for some time. It was their fourth attempt to assist the stricken animal.

Wildlife officers first spotted the elk with the tyre around its neck in July 2019 while conducting a population survey in the Mount Evans Wilderness.

Officers estimated the elk got the tyre stuck around its antlers when it was much younger, before growing antlers, or during the winter when the animals shed their antlers.

Another elk was spotted with the same predicament in 2013, also in Colorado.

Officers said at the time they chose to leave the elk alone, stating that “generally these things will fall off over time”.

How to save $50 off your food bill and still eat tasty, nutritious meals
Coal done by mid-2030s, energy boss signals
Today's Stories

‘All tyre-d out’: Elk with tyre stuck around its neck freed after two years