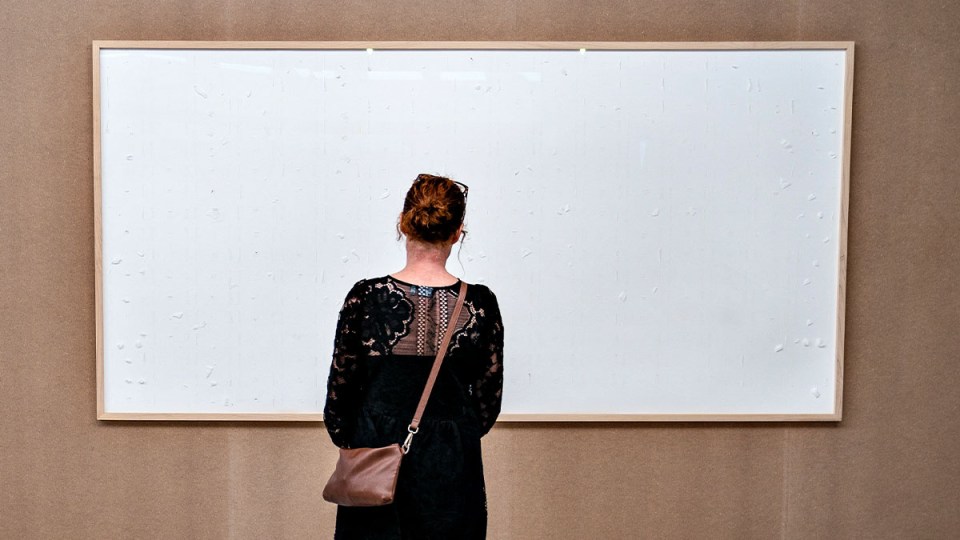 The work is a protest piece on low wages and poor working conditions, the artist said. Photo: Getty

A Danish artist has created an arguably priceless work of art, but the museum that commissioned it is not impressed.

Artist Jens Haaning was expected to create two artworks using $116,000 loaned to him by a Danish modern art museum.

But museum director Lass Andersson was shocked to instead receive two nicely framed blank canvases – a piece Haaning had titled: Take the Money and Run.

“The work is that I have taken their money,” Haaning told Danish radio show P1 Morgen.

Kunsten Museum of Modern Art in northern Denmark had commissioned Haaning to recreate two of his earlier artworks for an exhibition about the labour market called Work.

The earlier pieces, created in 2007 and 2010, featured real cash stuck to canvas as a representation of the average salary in Denmark and Austria.

The obliging museum lent Haaning 534,000 kroner ($A116,000) to use as his medium, hoping to hang the cash-heavy artworks in its new exhibit.

But when the wily artist realised it would cost him at least that amount just to fund the project, he was inspired to create something else, Denmark’s public broadcaster has reported. .

“Why do I not make a work that is about my own work situation?” he said.

The ripped-off museum has accused Haaning of breaking his contract, which stipulated the money would be returned after the exhibition, and has demanded he return the cash now.

But Haaning believes his creation is an accurate representation of working conditions and provokes reflection about unacceptable pay rates.

Mr Andersson has conceded the museum was happy to hang the empty frames under the title Take the Money and Run, but maintained Haaning must return the cash.

“I want to give Jens absolutely the right that a work has been created in its own right, which actually comments on the exhibition we have”, Mr Andersson told P1 Morgen.

“But that is not the agreement we had.”

Haaning has not disputed this, but is still refusing to issue a refund.

The exhibition ends in January 2022 and the museum has not yet committed to calling the police to report an alleged theft.

The real question is, if Haaning returns the money, will his artwork still exist?

Take the Money and Give it Back just doesn’t have the same ring to it.

Museum baffled after artist takes the money and runs