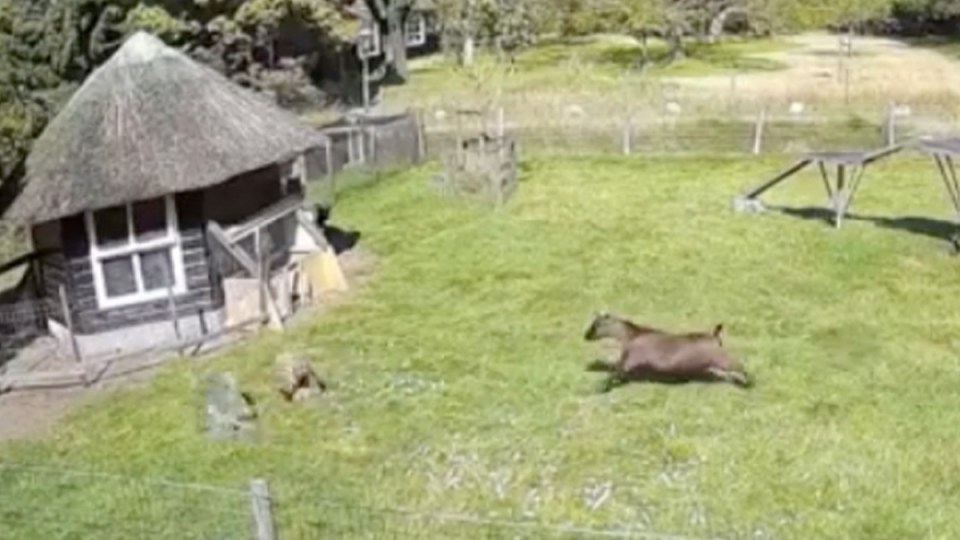 Dramatic footage has emerged online, capturing a life and death struggle between a hungry hawk and the animals of Beets’s farm in the Netherlands.

A little hen was minding her own business on September 5, possibly contemplating whether chickens or eggs came first, when the vicious attack occurred.

In the viral video, a large hawk is seen swooping into the farmyard with lunch on its mind, targeting the chook.

The meat-eating bird grabbed the terrified hen in its talons, trying to take off with her.

A nearby rooster rushed to the chicken’s aid in an attempt to fight off the much-bigger bird and save his friend from certain death.

But the predator was too strong and the angry, squawking rooster failed to intimidate it.

At that crucial moment, a brave goat named Bruin noticed the commotion and leapt into action, charging at the fluttering melée.

With their horns and beaks combined, the crime fighting pair successfully pushed out the blood-thirsty bird.

Less than 20 seconds after arriving, it dropped the hen and flew away in defeat.

The farmer, Jaap Beets, said he heard the chaos but it was over so quickly he had no time to intervene, according to The Irish Post.

“I heard the screaming animals but it was too late to see the attacker so I checked the CCTV. It took only 17 seconds between the appearance and disappearance of the hawk”, Mr Beets said.

But once he viewed the footage, the 59-year-old farmer was impressed by how his livestock had protected each other.

“I was so proud of the rooster and the goat jumping in to defend our chicken,” Mr Beets said, adding that he was relieved his hen had survived.

She suffered minor injuries and was back to her old self in a few days.

“The other birds rallied around and kept her company”, Mr Beets said.

His property is located in Gederland, a Dutch province located in the country’s east, along the border of Germany and the Netherlands.

It is not the first time his animals have faced a stand-off with predators.

“In the seven years I have lived here, it’s the third attack on our chickens,” he said.

“This was the second from a goshawk and the other was a buzzard.”

The clip went viral online and has been shared by news outlets in the Netherlands and around the world.

Reactions to the battle have been overwhelmingly in favour of the goat for his swift and heroic rescue.

Some even commented the little brown hen has better friends than most.

But one Twitter user played the devil’s advocate. They shared an imaginative impression of how the hawk felt going home empty handed.

We almost feel sorry for the hawk – almost.

How to haggle with lenders to get the best home loan deal
Do you MooLoo? Turns out, cows don’t mind if they do
Today's Stories