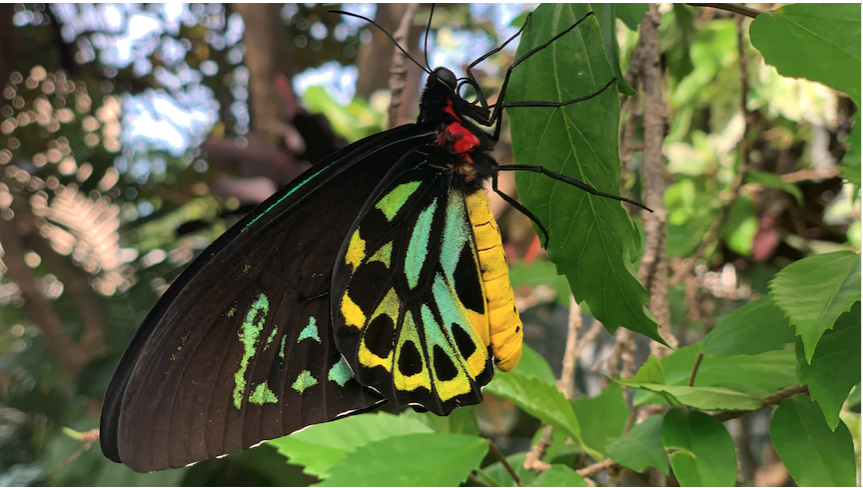 An abundance of food has contributed to the boom of butterflies like the Cairns birdwing. Photo: ABC News/Siobhan Heanue

A kaleidoscope of colour has enveloped parts of north Queensland as the region revels in a butterfly boom.

The explosion in numbers has caught the eye of scientists encouraged by the increase.

It flies in the face of fears in recent years that the iconic Ulysses butterfly may be dying out.

“One of the species we are seeing a large increase in numbers is the Ulysses,” said James Cook University senior botanist at the Queensland Herbarium, Ashley Field.

The Cassowary Coast, Cairns, and the Tablelands are teeming with the beautiful insects with prime weather conditions behind the boom.

“It’s a Goldilocks effect. It’s the middle ground,” he said.

“It’s been a very good season for many different species of butterflies. One of the reasons for that is that we’ve had quite a long wet season, it started early and it’s still going.”

Even with rainy conditions clearing, Dr Field predicted the boom could continue for quite some time.

“Because their food plants will continue to grow, many will get another generation in. So you will notice there will be more egg laying going on the next few days,” he said.

Unexpected impacts of the weather

Dr Field said the weather had some unusual impacts on the pattern of butterflies in recent years.

The tawny coaster butterfly migrated from India to the north at the same time as Cyclone Debbie in 2017.

“Their migration is related to climatic events and availability of food plants, so it can be different in different areas but they tend to move around,” Dr Field said.

Researchers are also preparing for the migration of the blue tiger to Magnetic Island after record numbers were seen in 2020.

“They travel many many kilometres in directional flight over winter and then fly back again at the end of that dry season, so the same individual lives almost a year and flies one way [to the Whitsundays, Magnetic Island, and Palm Island] and back again,” Dr Field said.

“They are remarkable creatures.”

But not all species are thriving. Climate change and habitat loss have taken a toll.

The Apollo jewel, traditionally found in paper bark forests between Cairns and Cardwell, are reliant on ant house plants as a food source.

“It has been gradually disappearing from areas that it was previously seen. It’s quite an uncommon butterfly and unfortunately it doesn’t seem to respond in the same way [as the thriving species],” Dr Field said.

Robin Cruse has dedicated many years to working with the winged beauties at the Australian Butterfly Sanctuary.

She said habitat destruction, seen as cities grow, was of real concern, but said she was encouraged by the resurgence of the Ulysses.

“The butterflies are the ambassadors for the insect world and we know from around the world the insects are definitely suffering,” Ms Cruse said.

“To see the Ulysses – which is the ones we all take notice of – getting better in numbers is very, very good.”

Ms Cruse said the community had an important role to play in preserving the butterflies’ future in the long term through reintroducing plants into their gardens.

“Each different species of butterfly caterpillar has its own specific plant or group of plants they feed on. If they are lucky they will have a wide range of plants,” she said.

“Often smaller butterflies will feed on smaller, insignificant plants that we all look at as weeds.”

As for the best place to spot a butterfly over the coming weeks?

“A lovely sunny, high spot is a good spot for finding butterflies, where the conditions are right for them. That’s when they tend to congregate,” Ms Cruse said.