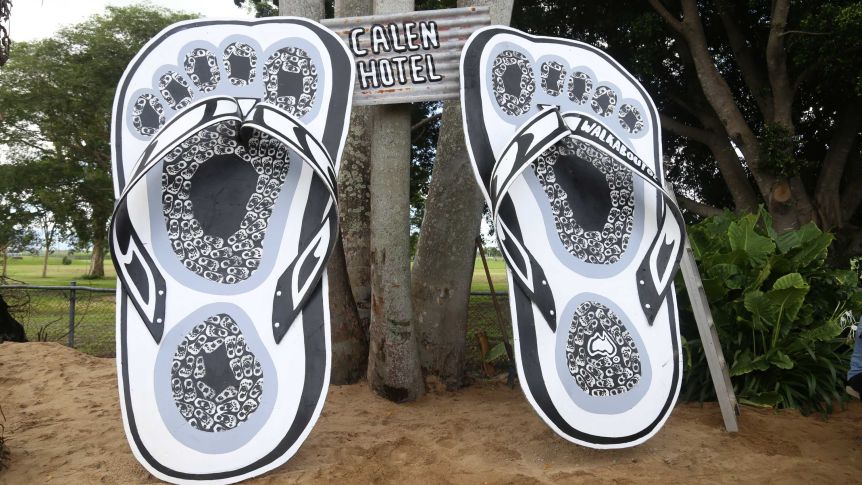 Australia’s latest big thing, a pair of Big Thongs, has been unveiled in the town of Calen, just north of Mackay.

The thongs join an esteemed list of big attractions in North and Central Queensland, including the Big Mango at Bowen, the Big Bull at Rockhampton, the Big Cassowary at Mission Beach and the Big Easel at Emerald.

Publican Gavin Butlin, known locally as Butto, said a group of mates were inspired the make the thongs as a way to increase tourism to the small town on the Bruce Highway.

“We had to come up with a way to get some tourists to pull in Calen,” he said.

“We were watching the caravans going up and down the highway and thought, ‘How do we get them in here?'”

Several ideas were thrown around before the group finally settled on a big pair of thongs.

“Lionel Knott, who does art, he went touring around the world a couple of years ago and left Australia in a pair of thongs,” Mr Butlin said.

“He came back in the same pair of thongs.

“His feet had nearly worn through the thongs when he got back to Australia.

“So over a few beers me and him decided to build a big pair of thongs.”

Four months later the thongs, which are 2.5 metres high, were built and unveiled at an Australia Day celebration.

How the Big Thongs were built

“I had to cut them out with a Stanley knife, which was one of the hardest things I’ve had to do.

“It was hard material to work with.”

Mr Knott, who is a portrait artist and also works with kangaroo hides, said he was incredibly proud of the end result.

“They’ll be hanging around for a long time yet,” he said.

“They’re built to last, like a good old pair of Aussie thongs.”

He said country pubs in small towns like Calen had struggled for years, even prior to the COVID-19 pandemic, so he hoped his work would bring a boost to the area.

“I think thongs might be the oldest footwear in the world – they date back to the ancient Egyptians,” he said.

“Every one in Australia has a pair of thongs, so that’s what we ran with.”

The thongs are located at the Calen Pub, just off the Bruce Highway.