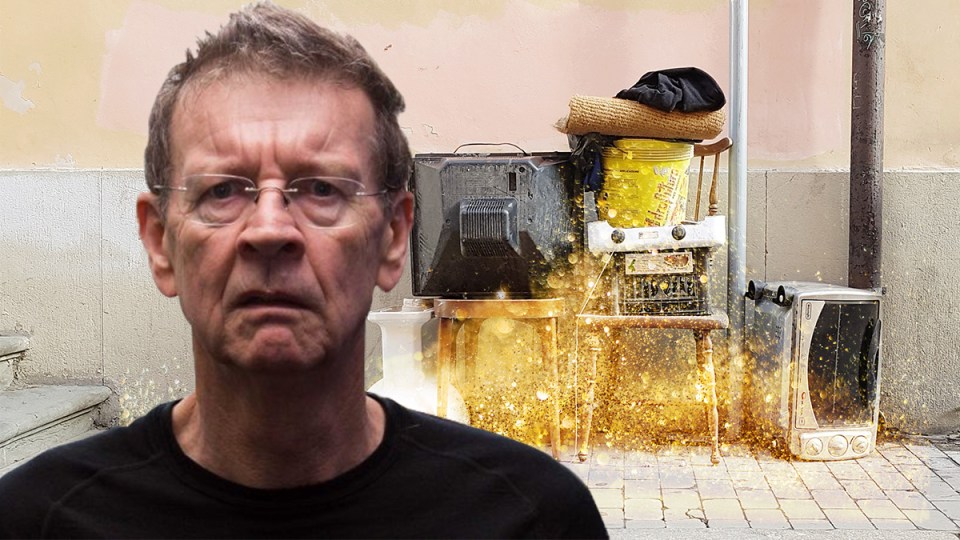 Red Symons is finding it painful to resist the glittering temptation that is hard rubbish. Photo: TND
opinion

What do you need?

I was once in a milkbar on a Saturday night waiting behind a dishevelled man seeking cigarettes.

“I’ll have a pack of Winfield Gold, thanks”, he said.

“Nah. Gold thanks”, he insisted.

It was once the case that cigarettes in gold boxes sold better on the weekend because they conferred status and success.

What you thought you needed is surprisingly easily dispensed with. It turns out it’s not guns or toilet paper.

At this point in time, the populace, stripped of the usual accoutrements of identity, are going to the supermarket in the clothes that they wear to lie on the couch watching television whilst occasionally venturing outside to put out the rubbish.

I have seen them in their pyjamas.

I once met a gentleman filling up at a petrol station and observed that his car looked expensive.

“No”, he said, “Two hundred dollars down and the rest on summons.”

He showed admirable detachment about his status and identity. That car, once worn to dress and impress, is now closeted at the kerb.

I rode on a tram yesterday and it was like a stretch limousine. The driver was singularly devoted to achieving my destination and I had the entire passenger area to myself.

I tipped my forelock to him as I disembarked and I suspect if I asked him to hover while I ducked into a shop for some Winfield Gold he would have happily complied.

What do you need?

Everyone has their own list and, as the days of lockdown accumulate, I wonder if our needs simplify and converge.

The streets are increasingly filled with pop-down shops, empty shops that once sold things now no longer needed. Yesterday I saw one that, until recently, specialised in baby formula to be sent over the seas; no longer needed.

A bookshop normally filled with moderately uninteresting books at heavily reduced prices was offering them at $50 a box. The box was free and could carry enough weight to require two people or a trolley.

Is it time to read the books you already bought but have never read?

The pace of pop-down shops is accelerating as need diminishes.

What do I need?

It once seemed to me that, along with news, traffic and weather, daily broadcasts should include notification as to which suburbs hard rubbish was available each day. To me, hard rubbish is like the specials at Aldi. Even if I have no use for it, it’s hard to resist at that price.

I was warned off the idea of a broadcast notification because it’s not free for everyone. It’s baggsed by the council.

I have spent some time in the centre of town amongst the canyons of apartments and from time to time noticed middens of belongings piled on the pavement. TVs, microwaves, beds and tables have been thrown out, perhaps by the landlord uncomfortable with the 20 people he found living in a two bedroom apartment,

I may be wrong but it’s hard to resist creating an imaginary narrative to explain the world.

I recently walked past a pile of hard rubble on which was a rusting bike. Interested, I squeezed the tires and found them firm and inflated. Without a helmet, I rode/pushed it home.

One of my sons, recognising my penchant, came home with a No Parking sign complete with pole.

At my retreat, I have taken possession of a giant padlock, a giant match and a giant pair of jeans. I like things that are not to scale and I can’t remember where they came from.

I have twice recently seen superheroes in the hard rubbish. This is not a hallucination. It is not an unconscious need for the world to be set to rights nor an abandonment of earlier hopes. I can draw no meaning from it. I feel compelled to provide documentation.

I saw a pair of calipers discarded on the street yesterday. There is no narrative thread that I can concoct to explain this.

They were available but maybe I would catch what had finished off the previous owner?

A genuine regret about the current lockdown is that I must also isolate myself from other people’s discarded things.

Red Symons has a yen for what he cannot have: Hard rubbish