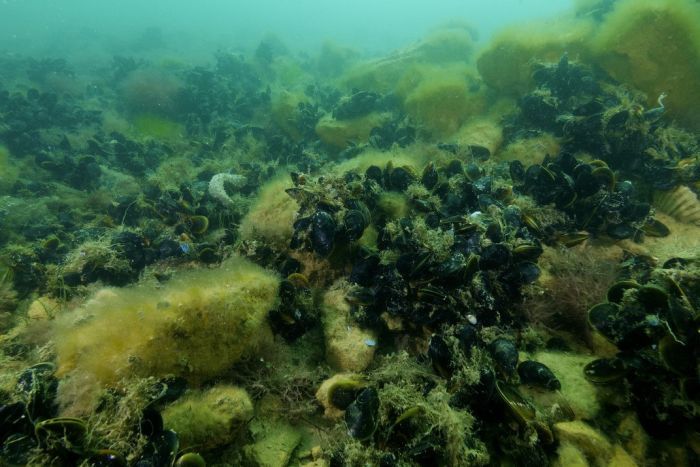 New reefs now cover an area the size of the MCG in what was just sand. Photo: ABC: The Nature Conservancy

At a secret location, nine metres under Port Phillip Bay, divers are combing a newly created oyster reef with a high-powered camera.

Up on the dive boat, the pictures on the video screen are a window into Bob Pearce’s teenage years in the 1960s – before overfishing, pollution and disease wiped out 99 percent of Australia’s shellfish reefs within a few decades.

“We were left with a marine desert,” he says.

But this two-year-old reef is teeming with life – created from seafood shells collected from restaurants that would have otherwise ended up in landfill.

“It’s an amazing thing how critters know there’s something there, and they come to it,” he says.

“Crabs, oysters, starfish, octopus, squid, snapper – you name it, they’re all there.”

This is one of 10 pilot sites in four Australian states rebuilding the enormous chain of reefs that once stretched along the coast from Noosa to Perth, that were all but wiped out by dredge harvesting last century.

“They tore the reefs to pieces,” Mr Pearce says.

“It broke my heart.”

Back in the 60s, when Mr Pearce first joined the Albert Park Yachting and Angling Club, he remembers being able to collect buckets of oysters in the shallows of South Melbourne beach.

“If you felt like a feed of mussels, you’d just go and get them off the pier pole,” he says.

“Every house along here had a mussel rake. We used to have them with a bit of brown vinegar and pepper.

“People told me not to worry about the dredging, but it’s left us with a marine desert. I just put my hand up at a club meeting one night and said ‘We should do something about this’.”

It was the start of what became a multi-million-dollar project to begin rebuilding Australia’s shellfish reefs, funded by philanthropic giant The Nature Conservancy, with help from state and federal governments.

It has restored more than 100 similar reefs in the United States — and now wants to do the same in Australia on a similar scale.

A map showing how shellfish reefs used to stretch along the south and east coasts of Australia.

“That’ll take an investment of about $100 million. State and federal governments have provided some support for the projects underway so far, but we want them to invest so we can quickly scale up.

“If we can get that, this can be a game changer for water quality and fish stocks in Australia.”

The conservancy is lobbying to get the project funded in the next round of state and federal budgets.

It’s pushing hard on its value as a job-creation scheme in the regions and also as a way of preventing coastal erosion.

“We need them to understand that these reefs are part of our national infrastructure. It’s just that they are alive. And we’ve got a way to go to convince them of that.”

In just a few years, 8 million native angasi oyster hatchlings have been placed in the waters off Victoria, South Australia, Queensland and Western Australia, on the recycled mollusc shells collected from restaurants.

They’ve turned empty, sandy seabeds into thriving ecosystems – covering an area the size of the MCG in Port Phillip Bay.

“The results so far have been staggering,” Mr Gilmore says.

“A single native oyster can filter a bathtub of water every day. That’s billions of litres of clean water every single year of being filtered.”

Mr Pearce says every time he goes back, it reminds him of the bay he once knew.

“There’s thousands of pink snapper swimming on that reef that wouldn’t have been there otherwise,” he says.

“If we can just keep doing this a chunk at a time, eventually we’ll have something fantastic again.”

After being dredged to nearly nothing, Australia’s lost shellfish reefs are roaring back to life