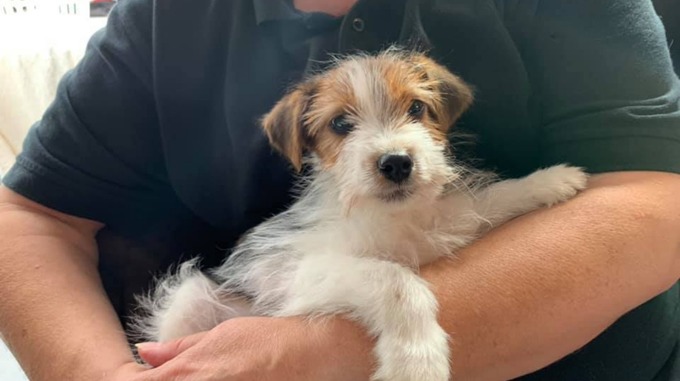 Boris Johnson's new dog Dilyn was rescued after being dumped by a puppy farm in Wales. Photo: Friends of Animals Wales

Boris Johnson will be needing a comforting hug after his Brexit loss this week – and he’s got the perfect new companion for the job.

It has been a busy week for the UK Prime Minister.

As well as his landslide loss, a new tenant moved into 10 Downing Street: Dilyn the Jack Russell puppy.

The pup arrived with fanfare all the way from Wales to be welcomed by his new family, Mr Johnson and his girlfriend Carrie Symonds.

Dilyn was abandoned by a puppy farm in Wales because he was born with a crooked jaw.

He was saved by the Friends of Animals charity group, and subsequently adopted out.

The Prime Minister’s office used the adoption as a chance to cement Mr Johnson’s stance against puppy farming.

“The prime minister has always been a passionate supporter of animal welfare and has always believed that animals should always get the right start in life,” a spokesperson said.

Next year the UK will introduce new legislation to crack down on puppy farming, banning the sale of puppies and kittens by third parties.

Animals under the age of six months will only be able to be bought directly from a breeder or animal rehoming centre – they’ll no longer be sold in pet shops.