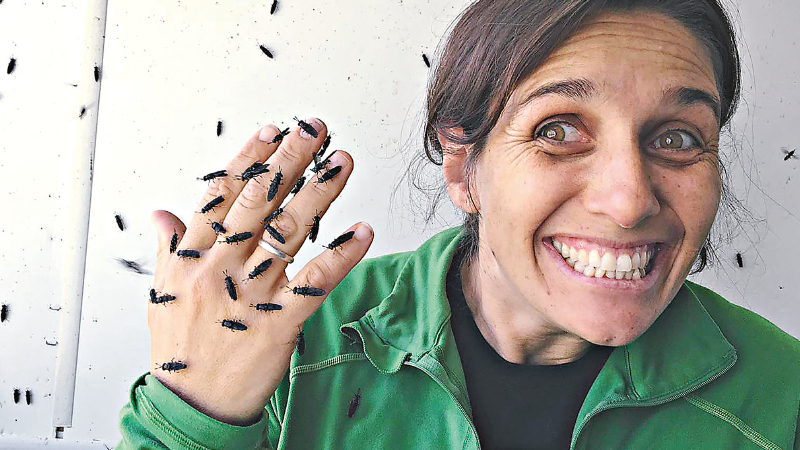 When Olympia Yarger started farming maggots, it’s because she couldn’t afford to feed sheep, cattle or even chickens.

She figured maggots – which can be fed to livestock – might solve that problem. Her hope was to run a conventional farm.

Instead, she recognised the “beautiful opportunity” that maggots might solve bigger problems – those of of food waste and landfill, and the rising cost of feed for farmers. That was in 2014.

Since the she has built a novel business based on the idea of “decentralised waste management.”

Instead of food waste being transported to the local tip, modular units full of black soldier flies – parked in the basement of office buildings, schools, hospitals and subscribed by individual households – convert up to five tonnes of food waste a day into one tonne of maggots, and 200 kilograms of manure.

No arable land is required for maggot farming, and less than a litre of water produces a kilogram of almost pure protein.

The maggots are euthanised with carbon dioxide and sold as feed – and the manure sold to gardeners. It’s a model that Ms Yarger is determined to see replicated and expanded across Australia.

Plenty of businesses have foundered on their big dreams, but not many of them are earning revenue off the back and front end – or have hit the sweet spot of the zeitgeist so well.

According to the Department of Environment and Energy, Australians in 2016-2017 produced 7.3 million tonnes of food waste across the supply and consumption chain.

Public consciousness of this scandal has been elevated by the ABC’s War of Waste campaign, now in its second series.

Eight months ago, Ms Yarger’s business, Goterra, entered a partnership with the CSIRO via the research body’s Kick-Start Program, which matches start-ups and small businesses with research and development activities.

In this instance, the CSIRO provides technical support and advice to Ms Yarger in optimising her fly breeding program.

Part of the motivation here was to give Ms Yarger – and Australia – an edge in a business that is growing globally. This is according to Dr Cait Paull who heads CSIRO’s Pest Suppressive Landscapes Team – which focuses on studying the behaviour of insect pests and their predators, looking for new ways to protect crops from infestation.

“We were pretty much straight-away able to help Olympia just by observing what she did, and being able to somewhat test and tweak it,” Dr Paull told The New Daily.

Dr Paull noted that “being connected with an emerging Australian industry… meant the relationship was a two-way collaboration”– allowing the CSIRO to test lab-based results in an up-scaled real-world situation.

“The knowledge benefits are going two ways,” she said. “We can test all sorts of things in the lab and get fantastic results. The next step of applying it to real world problems, or upscaling in a commercial sense, takes a long time. And we don’t have the capacity to do that, or if we do it takes a long time.

“We’ve been able to take what we’ve found in the lab, bring it down to Goterra and test it on the industrial scale.”

Dr Paull was unable to give an actual example because of commercial confidentiality agreements. The use of insects in waste management and farming is becoming a billion dollar business.

“The world outside Australia has made moves in a commercial sense,” she said. “We’re hoping that the work we’ve done provide (Ms Yarger) some advantage to get ahead of the game for Australia.”

Dr Paull said Mr Yarger seems to take “an almost altruistic” to what her work could mean for Australian research. In honour of that work, a CSIRO taxonomist recently named a new species of the soldier fly after Ms Yarger: Hermetia olympiae.