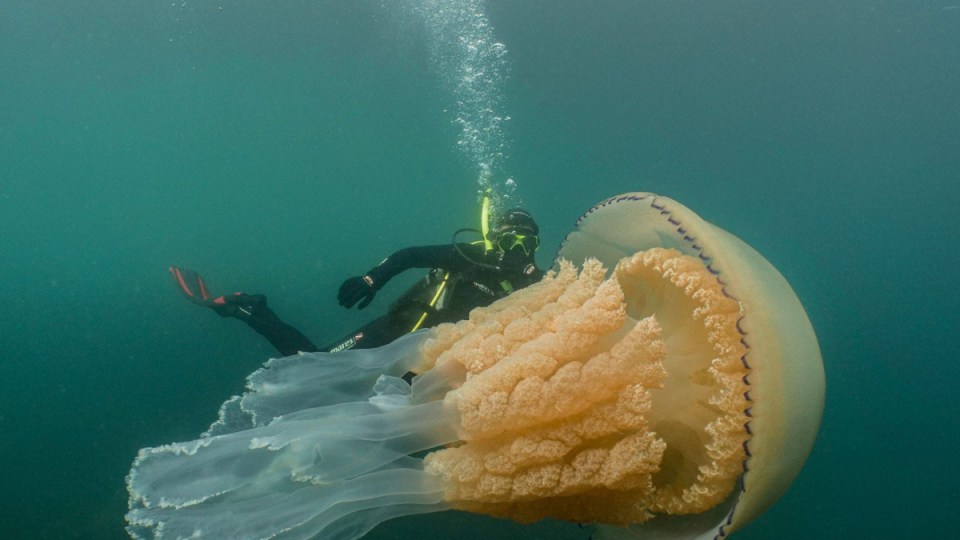 Lizzie Daly swimming with the enormous jellyfish off the coast of Cornwall. Photo: AAP

Divers have discovered enormous, human-sized jellyfish off the coast of Britain.

Biologist and BBC Earth host Lizzie Daly and wildlife cinematographer Dan Abbott swam with the jellyfish in the sea off Cornwall during Wild Ocean Week, describing the moment as “breath-taking”.

“What an unforgettable experience,” Ms Daly wrote on Facebook.

“I know barrel jellyfish get really big in size but I have never seen anything like it before.”

The barrel jellyfish is the largest species of jellyfish found in British waters. It has an average diameter of about 40 centimetres, though it can grow to 90 centimetres – and weigh as much as 35 kilograms.

Fortunately, despite their size, the jellyfish are gentle giants with stings that are too weak to hurt humans.

Nick-named “dustbin-lid jellyfish”, they feed on plankton and can be seen on British coasts in summer and autumn.

Wild Ocean Week raises money for Britain’s Marine Conservation Society, which campaigns for ocean conservation. During it, Ms Daly and Mr Abbott spent a week filming their experiences over “seven days, 21 videos, six locations and one heck of a journey”.

Ms Daly said it was a “real-life adventure”.

“We saw everything from swimming with seals on the east, to breaching minke whales, lunge feeding whales, dolphins and then finishing with the giant barrel jellyfish,” she said.