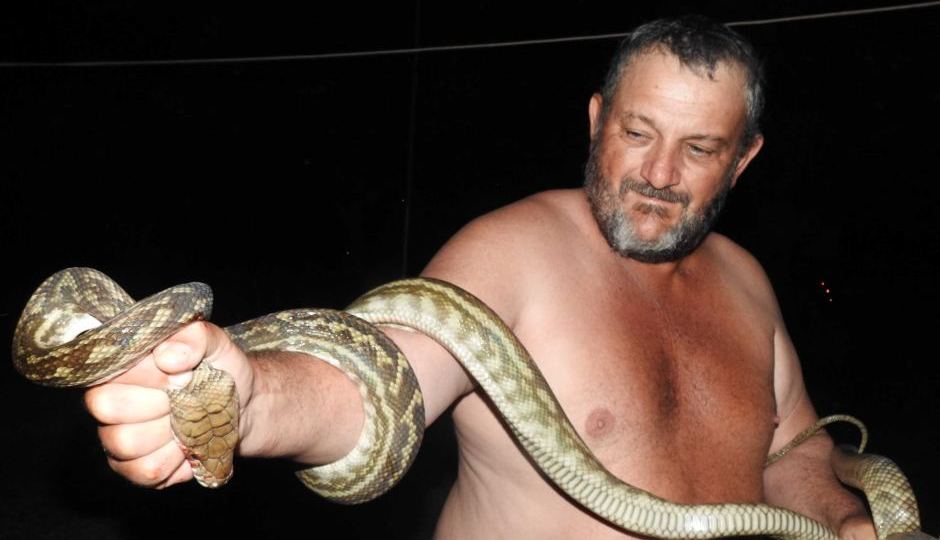 Neville Jackson was able to remove the snake from his son's arm after 10 minutes. Photo: Emma Jackson

Emma and Neville Jackson woke up in the middle of the night to the sound of their screaming 14-year-old son, only to discover he had been attacked by a three-metre-long snake.

Ryan, who lives on a cattle station south of Weipa, was woken to the “aggressive” scrub python coiled around his arm, sinking its teeth into his hand.

“We’ve gone running to see what’s going on and Ryan had his arm in the air screaming in pain with a scrub python wrapped around it,” Ms Jackson said.

“It was trying to eat his hand.

“We wrestled with it but the more we kept trying, the more the head would inch its way up and it would sink its teeth in higher and higher.”

The 14-year-old said his parents saved him with some creative thinking.

“They used a platypus money box … they used the platypus’s beak to shove it in the snake’s bottom jaw and my dad tried to push the snake’s mouth forward to lift it off my hand,” he said.

Ms Jackson said it took about 10 minutes to prise the “hungry” reptile from their son’s arm.

“We’ve taught our children not to fear snakes because they’re everywhere, but this one was hungry and aggressive and not keen to let go,” she said.

Ms Jackson said it was lucky the snake did not go into the room of her four-year-old daughter Trixie-Bell.

“Ryan took one for the team in a way because I think the snake would have killed her. The aggression behind that snake, it would have taken her,” she said.

Although his parents strongly believed it was a harmless scrub python that took hold of their son, they wanted to get him to hospital to make sure.

“Ryan’s hand was instantly swollen, and he was in a lot of pain and there was a fair bit of blood,” Ms Jackson said.

“We did the snake bite bandage just in case, because if it was venomous, we’re in the middle of remote Cape York.

“We were pretty confident it was a scrub python but we’re not experts, so we drove to Weipa and the Royal Flying Doctors took Ryan to Cairns Hospital.”

After an overnight stay, the hospital staff let Ryan go with some antibiotics.

“Since then my husband’s put some chicken wire on the window and we’ve been doing some cleaning to check the dark corners to make sure there’s no visitors hiding.”

The family said the attack was a reminder of the dangers that come with living in Australia and that we all needed to be aware of the threat snakes could pose.

“I don’t do anything too different now, but I check my room every night,” Ryan said.

“I’m not really scared of snakes I’m just more cautious of them.”

‘I am not afraid’: The modern unknown soldier risks it all in Ukraine
Greens sign up for Labor’s looming jobs-and-skills summit as Liberals stick with boycott
Joe Biden’s $430b green victory for the environment
China cementing its Thailand ties with joint military exercises
NRL: Titans frantic to end 10-game losing streak as Manly showdown looms
AFL: Western Bulldogs cling to finals hopes after GWS thriller
‘Please help me!’: US teenager Jayme Closs’s 87 days of hell held captive in a Wisconsin cabin
Today's Stories