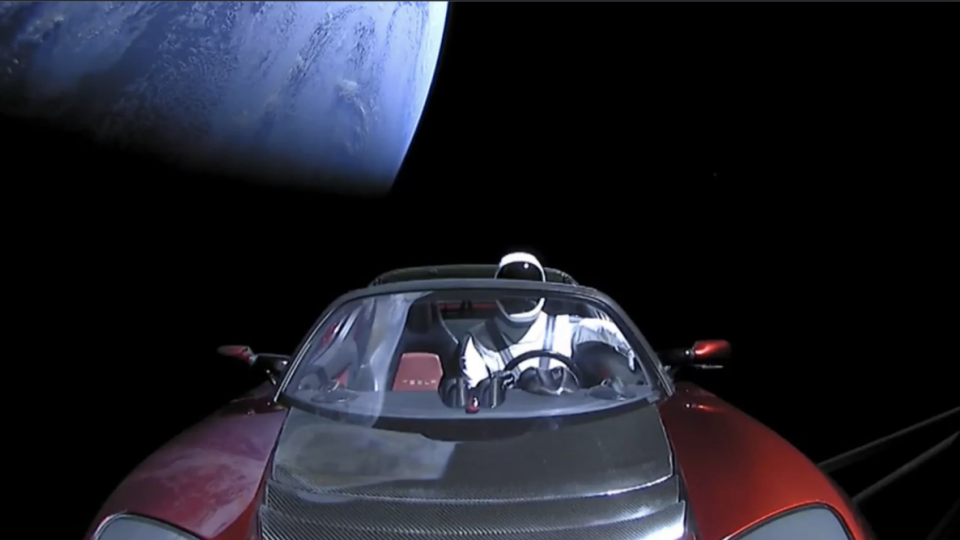 Elon Musk’s space-bound Tesla Roaster with its dummy “Starman” at the wheel has just cruised past Mars.

Nearly nine months after it blasted off from the Kennedy Space Centre on a Space X Falcon Heavy rocket, the red electric car and driver are on the ultimate road trip. .

Mr Musk’s Tesla became the fastest ever car when it was launched on its endless road trip to the strains of David Bowie’s Space Oddity in February.

Space X has now confirmed the car and driver have passed Mars on their way to “the restaurant at the end of the universe,” in reference to the book by Hitchhiker’s Guide to the Galaxy author Douglas Adams.

Starman’s current location. Next stop, the restaurant at the end of the universe. pic.twitter.com/Ty5m8IjJpE

According to the tracking website, whereisroaster.com, the Tesla and its passenger are now more than 289,864,803 km from Earth.

It said the car is moving away from Mars toward the Sun at a speed of 33,955 kmh and had travelled far enough to drive all the world’s roads 16.4 times.

From Mars, the Tesla will  continue its orbit around the Sun, looping back toward Earth and is expected to near our again in August, 2019.

A paper published on Cornell University’s science website, arXiv, earlier this years estimated the car would have its first close encounter with Earth in 2091, possibly passing closer than the moon.

The research also predicted there was a 6 per cent chance Starman falling to Earth in the next one million years, although he would likely burn up in our atmosphere.