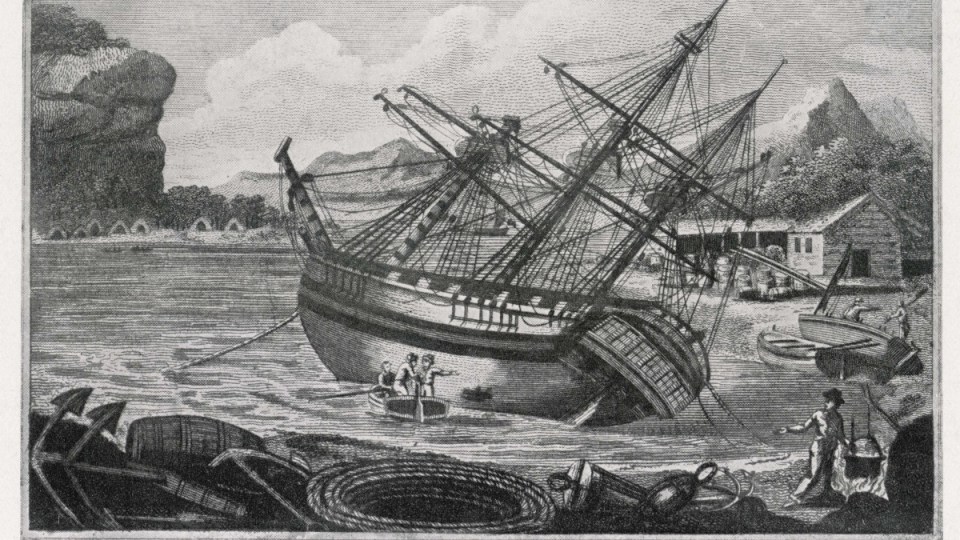 Captain Cook's Endeavour being repaired, c1770. It is now believed to have been scuttled off Rhode Island. Photo: AAP

Australian and US archaeologists believe they have found Captain James Cook’s HMB Endeavour, but it could take four months to test wood taken from a shipwreck found at the bottom of a harbour on America’s east coast to prove it.

Ironically, the answer to the mystery of the Endeavour’s final resting place could be the same location as Australia’s greatest sailing victory.

It was found in Newport, Rhode Island where the John Bertrand-skippered Australia II won the America’s Cup in 1983.

A 25-year-long archaeological study of transport ships deliberately sunk by the British in Newport Harbour during the American War of Independence in 1778 led to a wreck that fits the dimensions of the Endeavour.

The results of the study were announced at a press conference held by Dr Kathy Abbass, founder of the Rhode Island Marine Archaeology Project.

The Endeavour, through its lifetime, was used for different purposes.

After Captain Cook took it on his historic voyage to Australia and the South Pacific from 1768 to 1771 it was re-fitted into a transportation vessel.

It was renamed the Lord Sandwich II and in 1775 was used to take German mercenaries to Newport and New York before its final refit into a prison ship.

It is believed the British sunk the Lord Sandwich II and 12 other British ships in Newport Harbour as a tactic to block the French, who were allies of rebelling American colonists, from entering in 1778.

Three will be delivered to separate laboratories around the world, with one location possibly Australia, to confirm if it is timber grown in the north of England in the early part of the 18th century.

That would match the timber used for the Endeavour.

The fourth sample will be stored and archived.

Archaeologists believe it is likely the Endeavour because the shipwreck matches the size of the 360 tonne vessel Captain Cook sailed.

A final piece in the puzzle will be if evidence is found the wreck was formerly a prison ship.

“What will ultimately determine which of the ships is Endeavour is if we are lucky enough to do an excavation that finds evidence that it was used as a prison hulk,” Mr Sumption said.

“That will be the definitive evidence really.”

Despite the historical significance of the Endeavour to Australia and New Zealand, if it is determined it is Captain Cook’s former ship it will remain in Rhode Island at the bottom of the harbour.

“The legal ownership of the vessel is incontestable,” Mr Sumption said.

“It is Kathy’s and RIMAP’s under Rhode Island salvage law.

“What we hope to continue to do with Kathy is with her permission, and the Rhode Island authorities, is look for a loan of a small amount of material at some point when there is a positive identification and we can help with preservation.

“Ultimately that will be something that is over a year or possibly a couple of years away.”

Matildas will be keen to forget 7-0 drubbing by Spain
Upcoming stats will reveal where and how hard rates are hitting economy
Victorian MPs pocket a tidy 2.75 per cent pay raise
Reserve Bank review isn’t a ‘get the governor’ exercise: Jim Chalmers
‘Violence for weeks’ feared after landmark US abortion ruling
Aussie Hannah Green within striking distance of Women’s PGA Championship lead
What tangled webs spiders weave when first they try to conceive …
Today's Stories