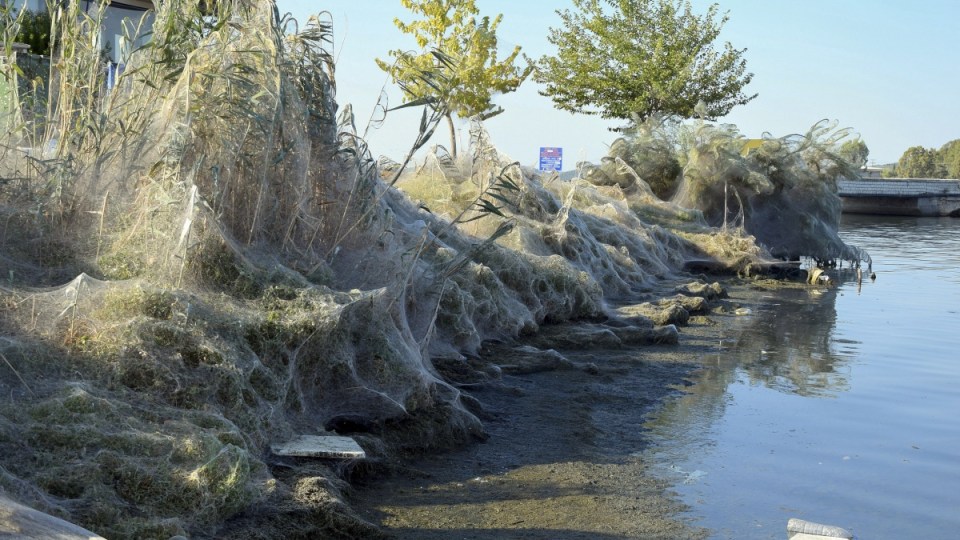 Trees and vegetation along the lagoon shore are covered in sticky spider web. Photo: Giannis Giannakopoulos

Spiders enjoying warmer weather and boom in their favourite food have created an eerie 300-metre-long web along the shore of a lagoon in western Greece.

Locals in Aitoliko awoke to the freakish sight a couple of days ago. A vast area of greenery, including palm trees, salt cedars and thorny bushes, along the Missolonghi Lagoon shore was covered in the sticky web of the tetragnatha spider.

Aitoliko local Giannis Giannakopoulos, who shared dozens of photos of the lakeside webs on Facebook, described the phenomenon as a “strange and unprecedented spectacle”.

He said a “big veil” covered palms and other vegetation all along the lagoon shore – and the spiders were catching plenty of mosquitoes.

Experts say it is a seasonal phenomenon, and the spiders often build large nests for mating.

An increase in the mosquito population is also thought to have contributed to the rise in the number of spiders.

Maria Chatzaki, professor of molecular biology and genetics at Democritus University of Thrace, Greece said high temperatures, humidity and food created the ideal conditions for the spiders to reproduce in large numbers.

“It’s as if the spiders are taking advantage of these conditions and are having a kind of a party. They mate, they reproduce and provide a whole new generation,” she told Newsit.gr.

“These spiders are not dangerous for humans and will not cause any damage to the area’s flora.”

There are hundreds of species of tetragnatha spiders all over the world. They’re apparently also known as “stretch spiders” because of their long bodies.

What tangled webs spiders weave when first they try to conceive …