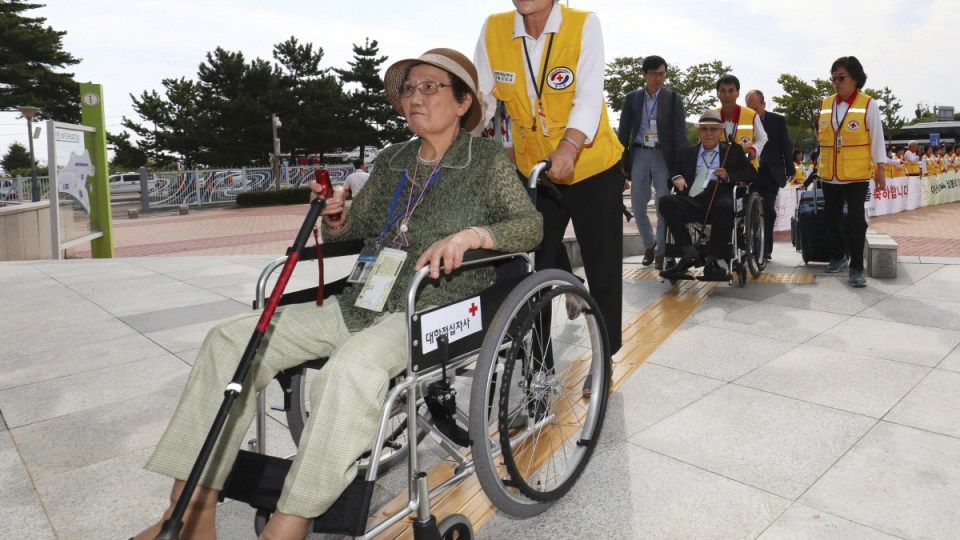 Elderly South Koreans on their way for a long-awaited visit to relatives in the isolated North. Photo: AAP

Dozens of elderly South Koreans have crossed the heavily fortified border into North Korea for heart-wrenching meetings with relatives most haven’t seen since they were separated by the turmoil of the Korean War.

The week-long event at North Korea’s Diamond Mountain resort comes as the rival Koreas boost reconciliation efforts amid a diplomatic push to resolve a standoff over North Korea’s drive for a nuclear weapons program that can reliably target the continental US.

The temporary reunions are highly emotional because most participants are elderly and eager to see their loved ones once more before they die.

Most of their families were driven apart during the 1950-53 Korean War. It ended in a ceasefire, not a peace treaty, leaving the Korean Peninsula still in a technical state of war.

Buses carrying about 90 elderly South Koreans and their family members crossed into North Korea on Monday at the eastern border town of Goseong.

They were due to reunite with their long-lost North Korean relatives on Monday afternoon at the start of a three-day reunion. A separate round of reunions from Friday to Sunday will involve more than 300 other South Koreans, according to Seoul’s Unification Ministry.

Past reunions have produced powerful images of elderly Koreans crying, embracing and caressing each other.

Nearly 20,000 people have participated in 20 rounds of face-to-face reunions since 2000. Another 3700 exchanged video messages with North Korean relatives under a short-lived communication program from 2005 to 2007.

Long-awaited reunions for Korean families split by war and ideology