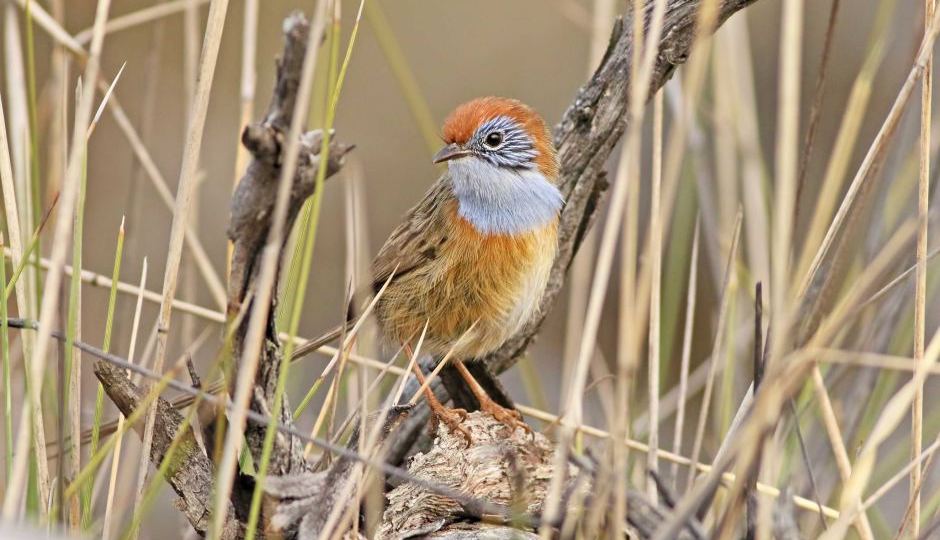 The Mallee emu wren weighs only as much as a 10 cent piece. Photo: Natural Resources SA Murray Darling Basin

After a series of catastrophic wildfires in 2014, the Mallee emu wren became extinct in South Australia, but the birds are making a comeback in the state with the help of environmentalists.

When the tiny bird — weighing only as much as a 10 cent piece — could no longer be found in SA, there were still numbers that existed in parts of Victoria’s north-west, but they were listed as endangered.

In one of the three national parks where they remained, Victoria’s Wyperfeld National Park, their numbers were only in the hundreds.

Researchers were concerned a severe bushfire season would threaten the remaining population.

Numerous organisations in South Australia, New South Wales and Victoria, together with the support of the South Australian government, devised a breeding program over four years to boost the birds’ numbers.

In April this year, 40 birds, known by bird enthusiasts as the ‘holy grail’, were introduced into parts of Ngarkat Conservation Park.

Another 40 birds are due for release in August, with researchers aiming to establish a population of 250 birds over several years.

Before extinction, the estimated population of Mallee emu wren in the early 2000s was upwards of 6000 in Ngarkat.

BirdLife Australia’s Rebecca Boulton said it was a massive challenge finding a net that could capture the little birds.

“They’re such a tiny bird and no one’s ever held them overnight and transported them such large distances before. We had to learn a lot about their husbandry.

“You can’t use a traditional net…they’re super fine but these birds are so small they just go straight through the net,” Ms Boulton said.

The group had to improvise, she explained, and used large throw nets that covered patches of grass to trap the birds.

It took one week to catch just 40 birds.

The next challenge for the birds was to find breeding territory and a good insect population to feed on.

“We did quite a lot of surveys before the birds were released. The habitat where we’ve left them is similar to the one they came from,” Ms Boulton said.

A number of prescribed burn-offs have been conducted in Ngarkat to reduce the risk of wildfires for next summer.

Natural Resources SA Murray Darling Basin project officer Luke Ireland said they would be using the next release of birds to refine their technique, before introducing a larger population.

He said the group found an easy way to keep track of the birds by painting their tails with nail polish in unique colour combinations.

Back from extinction: The Mallee emu wren makes a comeback in South Australia