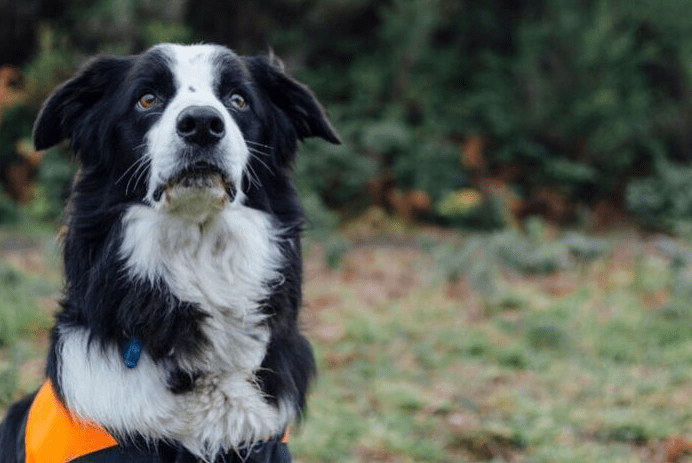 Border collie Rubble pays attention to frog-scent samples as his handlers give him an education in wildlife conservation. Photo: ABC/Danielle Bonica

Rubble is a seven-year-old border collie — a classic working dog. But the pooch has never herded a single sheep.

No offence to livestock, but Rubble has always had a higher calling — first as a search-and-rescue dog, and now as a conservation detection dog sniffing out some of Australia’s most elusive and endangered native animals.

Owner and trainer Luke Edwards says the dogs are perfect for the job.

“We know that border collies are really good at both searching and stamina,” he said.

“That’s what we’re after for working dogs — their stamina both mentally and physically. Border collies are well known for that.”

Mr Edwards and his partner Tracy Edwards run Canidae Development, an organisation that selects and trains dogs to search for animals.

“We sort of live a bit differently than most people with working dogs,” Mr Edwards said.

“We’ve got five dogs … and they’re all inside dogs with us. First and foremost they are working dogs but we live as a unit, as a pack.

The dogs have worked looking for koala and tiger quoll scat, as well as dead birds and bats as part of windfarm mortality surveys.

But last year, Rubble and Uda received their most difficult assignment yet. The dogs were called upon by Zoos Victoria to help sniff out one of the country’s most critically endangered species — the Baw Baw frog.

The small brown frog lives only on the Mount Baw Baw Plateau in eastern Victoria and, like a number of other amphibian species, it has been hit hard by the introduction of the deadly chytrid fungus.

It is estimated that there are fewer than 1200 Baw Baw frogs left in the wild. At the rate they are going, they are likely to be extinct in the wild within a decade.

Zoos Victoria amphibian specialist Deon Gilbert says up until now, the only way to find the elusive frog was to listen for their calls — but that can be very tricky.

“This species is incredibly difficult to detect in the wild,” he said.

“They live predominantly underground … the males only call for about five or six weeks of the year, so that restricts our opportunities to actually locate the species.”

Knowing where the frogs are is critical to Zoos Victoria’s captive breeding program. Dogs are often used to detect the presence of animals that live above ground. They’ve been used in northern Australia to detect cane toads.

But Mr Gilbert says using dogs to find a native amphibian species that lives underground is as rare as the Baw Baw frogs themselves.

“Dogs are very, very rarely used for amphibians. There’s only a couple of examples worldwide that have utilised dogs and it’s certainly a first for Australia,” he said.

The first challenge is training the dogs. To start with, the dogs are trained to locate the smell of a frog swab on a ‘scent board’.

When they recognise the smell, the dogs drop and indicate with their nose. They are then rewarded with a treat.

After that the dogs are giving limited and strictly controlled training with real frogs from the captive breeding program.

Ms Edwards says there is no actual interaction between the dogs and the frogs.

“As soon as they find that smell and do that drop, they look to us,” she said. “So they’re not actually looking to the animal for the reward, they’re looking back to us for the reward.”

Finally, it’s time to go up the mountain. And that’s where the challenges really begin. It’s remote wild terrain – and Mr Edwards says it’s hard on everyone, including the dogs.

“The first time we took the dogs up there we actually had about two inches of snow one night – the first time that the dogs have worked in the snow.”

Simply reaching the frog’s habitat is a major achievement.

“Going out to the sites in Mount Baw Baw is probably one of the hardest areas I’ve had to search,” he said.

“Just to get out to the site we’re trekking through alpine forest … it took us maybe 45 minutes to an hour just to arrive on site.”

Then the dogs had to catch a scent of the frogs, which can live in burrows up to a metre underground.

But the dish-lickers were not about to be licked. Both dogs found several frogs.

“The dogs were able to locate the exact site where the frogs were calling from much quicker than we were able to do just by using ears,” Mr Gilbert said.

Mr Edwards says it was exciting for everyone involved.

“I think the biggest surprise, particularly with Rubble there was … as he stuck his nose into a crevice the frog actually called,” he said.

“And he’s [like] ooh here’s a frog there and that was one that no one knew that was in that particular location, so it was really cool.”

The frog dogs not only have the potential to locate Baw Baw Frog populations, but also to help when it comes time to release captive-bred frogs back into the wild.

Mr Gilbert says the frogs take years to mature, and are not likely to start calling for five or six years … meaning scientists have a long wait to find out if they’ve survived.

“We have a huge dark period or dark window where we don’t know if those strategies we’ve put in place were successful or not,” he said.

“So we’re hoping to be able to use the dogs to indicate just presence or absence within that time period.

“If we release the frogs year after year we can use the dogs to just say ‘Yep, they’re there, they’re alive’ or ‘No they’re not there. Do we change our strategy and look for another option?’ ”

“We set up a challenge for those dogs to find a species that burrows in mud. It’s brown, it’s small, very cryptic, and the dogs actually detected Baw Baw frogs in the wild, so that was quite a thrilling development.”

“Particularly for those cryptic and low-density species, we think detection dogs might have a really important role to play. In fact, that could be their niche as a monitoring technique.”

Luckily for Zoos Victoria, there are more dogs coming up through the ranks that might be able to fill the new roles.

Detection-dog-in-training Oakley is now one-year-old and will start field work later this year and Ms Edwards has been in charge of his training.

“He’s only a puppy, or what we call a ‘whuppy’, a whopping big puppy,” she said.

“He is just living life at the moment, learning the basics so obedience and recalls and environmental exposure.

When it comes to endangered species, these dogs pass the sniff test