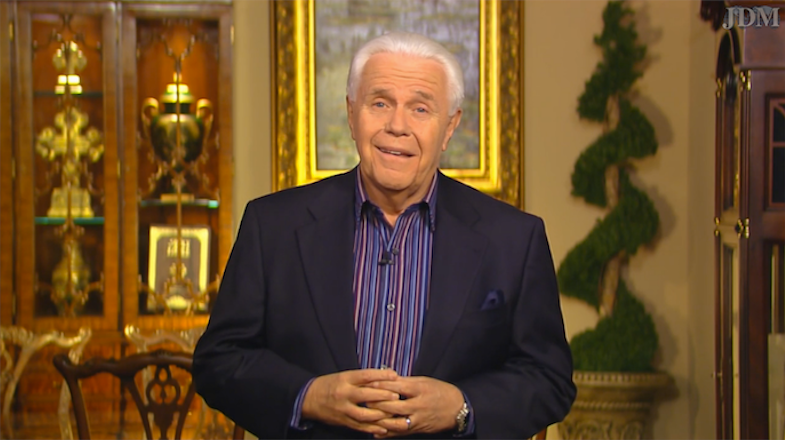 A US Christian televangelist has called on his flock to fork out US$54 million ($71 million) after claiming Jesus told him he needs a new private jet.

Jesse Duplantis, leader of Louisiana’s Jesse Duplantis Ministries, has put out the word that he needs a Dassault Falcon 7X — which would be his fourth jet — because the planes get him closer to the Lord.

In a video published on his website, Mr Duplantis said he had a divine conversation in which Jesus asked for the new aircraft by name.

“It was one of the greatest statements the Lord ever told me,” he said.

The plane would give him the ability to “go anywhere in the world” to preach without the need for stopovers, the minister said.

“I really believe that if Jesus was physically on the earth today, he wouldn’t be riding a donkey.”

In the video, Mr Duplantis also shows his followers a photo of him standing beside his other three jets – a Cessna Citation 500, an IAI Westwind II, and a Dassault Falcon 50.

Under the photograph is a quote, which he proudly states: “It’s not about possessions, it’s about priorities.”

The plane can seat up to 19 passengers but most Falcon 7X models are configured for only 12 although they can be customised to fit beds and showers.

Mr Duplantis is of the school of ‘prosperity preachers’ who believe donations to religious causes will increase one’s material wealth.

Fellow prosperity preacher Creflo Dollar faced a backlash in 2015 when he asked his followers to help him buy a Gulfstream G650, according to CNN.

In a 2016 segment of Mr Copeland’s Believer’s Voice of Victory TV program, he and Mr Duplantis defended their use of private jets, saying it would impractical to fly on a commercial airline “with a bunch of demons”.

Mr Duplantis recalled he was on his plane and had to unbuckle his seat belt and stand up to speak to God.

“You couldn’t have done that over an airline,” Mr Copeland observed. “Stand up and say, ‘What did you say, Lord?’”

“This is so important and those of you that are just now coming into these things in the first place: Jesse and I and others … the world is in such a shape, we can’t get there without [private jets].”

Mr Copeland went on to claim that a private jet was the only practical way for he and other preachers to travel.

“We’ve got to have this. The mess that the airlines are in today. I would have to stop — I’m being very conservative. At least, 75-80, more like 90 per cent of what we are doing. Because we can’t get there,” he said.

“That’s why we are on that airplane. We can talk to God!”

Watch the defence of private airlines below: