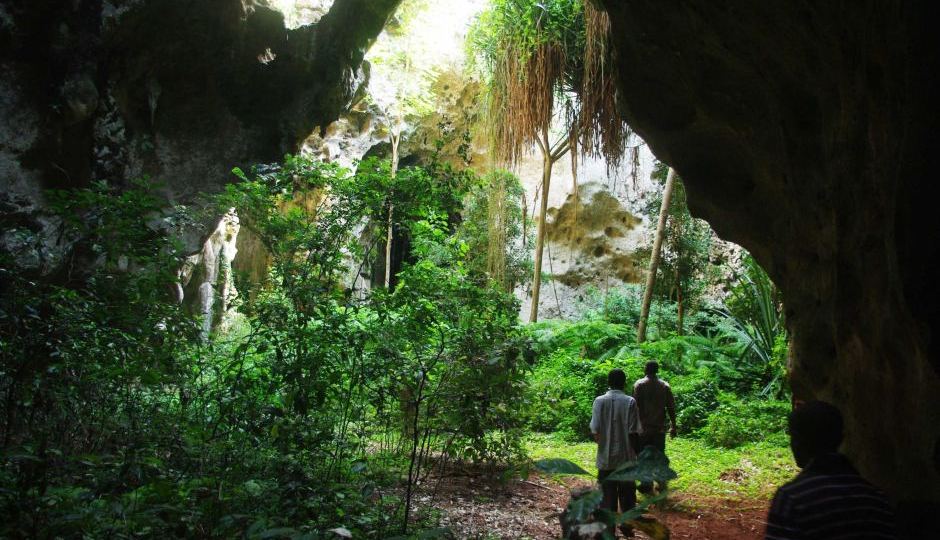 The Panga ya Saidi cave is where archaeologists have found a treasure trove of incredibly well preserved artefacts. Photo: ANU

Archaeologists exploring an enormous cave in Kenya have discovered some of the oldest examples of technological innovation by humans, beginning more than 60,000 years ago.

Thousands of items have been unearthed, including red crayons that are 48,000 years old and decorated beads made from sea shells and ostrich eggs.

He said for someone whose lifestyle would have revolved around hunting and gathering, the technology was comparable to the smartphone, or the car a hundred years ago.

“The invention of the bow and arrow, because it’s such an effective hunting weapon, could have a totally similarly revolutionary effect,” he said.

More than 30,000 items have been discovered, many of them in mint condition.

Examples of rapid innovation found in the cave include sharp arrow points carved from bone, more sophisticated use of materials for craft work and essential tools.

Dr Shipton said the way the artefacts changed over the timeline indicated the people who made and used them were very innovative.

“In the early part of the sequence, we see they are using quite big stone tools for making things like stone-tipped spearheads,” he said.

“Then around 67,000 years ago there is an abrupt change in the stone tools and from that point on, [the tools] become very small and made of very sharp stone.”

The cave, called Panga ya Saidi, is 15 kilometres from Kenya’s south-east coast, just north of Mombasa.

Dr Shipton, who was part of the team working in the cave, said it was unique in providing such an unbroken, continuous record of human occupation.

Humans moved into the cave 78,000 years ago and lived there until 500 years ago.

Dr Shipton said the technological revolution seen there in the Later Stone Age would have driven rapid change.

During that period, it was unusual for people to live in a tropical rainforest, as they were mostly found in grasslands where there were larger animals for hunting.

Living in a rainforest forced humans to hunt for smaller animals, such as monkeys and small deer, which required more sophisticated technology, thus driving the push for better tools.

This helps explains the rapid improvement in arrow points found in Panga ya Saidi.

Dr Shipton said it was the kind of “behavioural flexibility” that allowed humans to populate the rest of the world.

Other sites from the same period have been found in South Africa and the Rift Valley in East Africa, but this is the first site found with such a continuous record.

Dr Shipton said many of the items remain in excellent condition, partly because the cave protected them from the elements, but also because the limestone walls helped preserve materials containing calcium carbonate such as bone, marine shells and egg shells.

The tools are still sharp and the crayons still show grooves where they have been used.

Dr Shipton said the site was “inspiring” to work on, with clouds of butterflies rising from the vegetation as the jungle over time has begun to take over parts of the cave.

“You walk in through this narrow entrance and it opens up into this huge chamber with lots of little passages going off from it,” he said.

“It’s so old that the roof has collapsed, so inside it’s actually open air and there is all sorts of jungle growing from within the cave.

“And vines growing down from above as well, so when you go in it’s absolutely beautiful.

“It has these huge chambers that are lush and green inside and they’re 40 metres across with walls that are 15 metres high.

“It’s kind of a sanctuary for local wildlife, so there’s monkeys going across overhead, there’s owls that live in the cave and monitor lizards and a giant python.”

The cave remains sacred to the local people, so none of the vegetation or wildlife has been cleared away.

“There are parts of the cave, alcoves, that are used for rituals today and it’s a real privilege to work there,” he said.

“The locals that we work with are friendly and generous in letting us work there and they’ve also become good archaeologists in their own right.”

The project was led by the Max Planck Institute for the Science of Human History and the study was published in the Nature Communications journal.