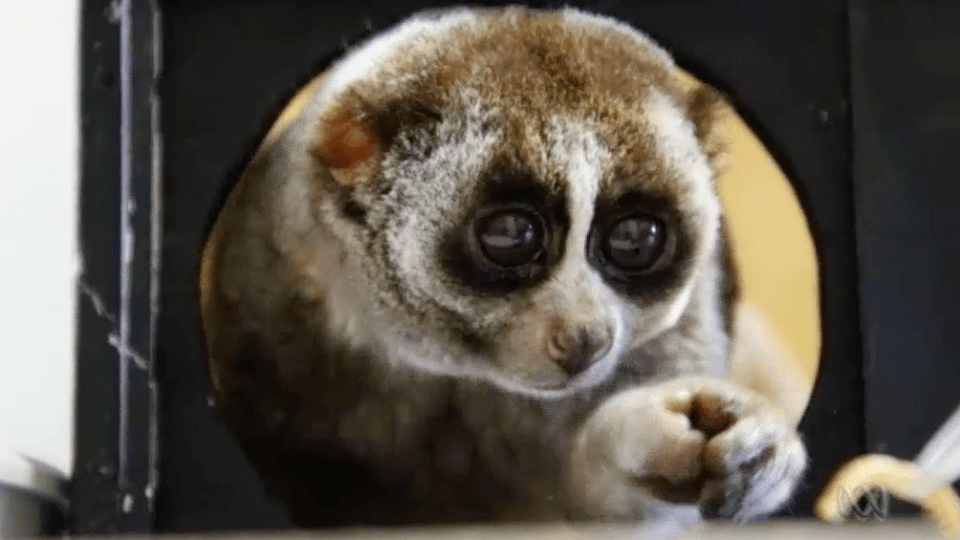 The two slow lorises – a three-and-a-half-year-old male and 10-year-old female – have spent the past month in quarantine, after leaving their home at Singapore Zoo.

Not much is known about their early life, but staff at Perth Zoo say they were destined for the illegal pet or tourist trade.

“They’ve both had their teeth trimmed to make them less of a threat as a pet,” Perth Zoo senior veterinarian Simone Vitali told the ABC.

“The male’s had significant root canal treatment before he came here, and so that’s something that we’ll have to keep an eye on now.”

“Other than the teeth, they’re in really good health.”

The slow loris, which is native to south-east Asia, is a popular subject in social media videos, where they are often filmed being tickled or handled as pets.

While the videos may be cute, Perth Zoo hopes to raise awareness that handling the slow loris can be extremely distressing for the animal, and viewers may be unwittingly encouraging wildlife trafficking by watching them.

“Having these particular animals here at Perth Zoo allows us to really get the message out about illegal trafficking of wildlife,” Dr Vitali said.

The primates, which cannot be released back into the wild due to the trauma of their confiscation, will now live out their lives at Perth Zoo as ambassador animals.

“These are the first slow lorises we’ve had at the zoo for over 10 years,” Dr Vitali said.

“It’s very exciting for all of us to have them here because they’re such a beautiful, charismatic little primate.”

The slow lorises will be moved into the zoo’s nocturnal house in the coming months.

Casualties of a social media storm, slow lorises are now on the road to recovery