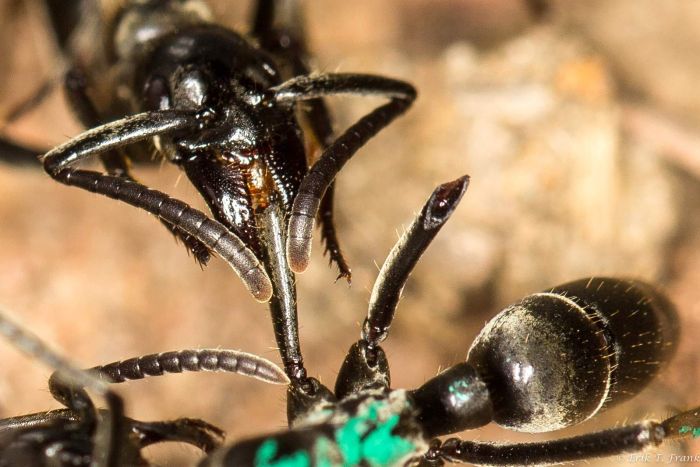 Close up of a Matabele ant tending to the wounds of a comrade. Photo: Eric T Frank

Researchers have learned that a species of ant saves its wounded comrades and transports them back to the nest for medical treatment.

Erik T. Frank, who led the research on African Matabele ants, believes it’s the first time any insect species has been found to dress the wounds of other individuals.

“We observed that they lick and groom the wound, and that they were able to reduce the mortality it causes,” said Dr Frank, a tropical biologist from Julius-Maximilians-Universität Würzburg (JMU).

“This is the first real, quantitative, scientific study in that sense, which really quantifies the value of that behaviour,” he said.

The research was published on Wednesday in the journal, Proceedings of the Royal Society B.

The species regularly preys on termites, and he noticed that the ants were rescuing their wounded comrades after raids on termite nests.

“[Matabele ants] have a very defensive prey, capable of inflicting injuries,” said Dr Frank. “When they had fights against termites, some of the ants got injured. These injured ants called for help.”

If they’re wounded, the Matabele ants secrete what Dr Frank described as a ‘helping call’ pheromone. Upon noticing this chemical signal, other ants rush to assist their comrades, and carry them back to the colony’s nest.

“I do feel that it has some parallels with military medics,” he said.

Ants saving 30 per cent of comrades

In a separate study in 2017, Dr Frank showed that this unusual rescue behaviour saved ant lives.

“They were able to reduce the mortality rate by roughly 30 per cent.

“What we basically were able to show for the first time, was properly organised saving of the injured. But we didn’t know what was going on inside the nest,” he said.

So, Dr Frank decided to take a closer look at what happened to those injured ants once they returned from battle. He said the ants literally lick the wounds of their nestmates to help them heal.

“The injured ant holds its broken leg – its cut-off leg – into the air,” he said. “The other ant grabs it with its mandibles. And then really starts licking intensively inside the wound for a couple of minutes.

“If we didn’t allow an injured ant to receive treatment, they died in 80 per cent of the cases, most likely due to an infection.”

By comparison, only 10 per cent of ants that did receive ‘medical treatment’ died from their injuries.

“This behaviour seems to be vital to prevent an infection of the wound, and for the survival of the injured ant.”

“It could be just a prophylactic treatment. Just cleaning the wound,” he said. “It could also be therapeutic, so basically a medical treatment where they apply antibiotics or other potential substances for the injured ant.”

Another major finding of the study was that Matabele ants won’t just save any injured nestmate.

He said the insects appeared to have some sort of ‘triage’ system, where ants decided in the field which individuals were able to be saved.

“The first time I observed it was actually an accident – I accidentally drove over one of the raiding columns of the ants with my car.

I was able to see this triage system live. [They were] basically only rescuing the ones that were worth saving.”

Dr Frank noticed that while ants missing one or two limbs allowed themselves to be saved, those with more severe wounds thrashed around wildly, preventing any assistance.

A ‘whole new field’ of research

Dr Frank said the discovery could lead to a greater understanding of how social insects value individuals, and that it may open up new areas of research.

“It opens up a whole new field which we previously didn’t really acknowledge: the treatment of wounds by other individuals.”

He said understanding how the ants heal could also lead to new medical treatments.

“It might potentially lead to possible antibiotics, which could be helpful in our own medical system.”

‘Anty’-biotics and triage as soldier ants save their wounded