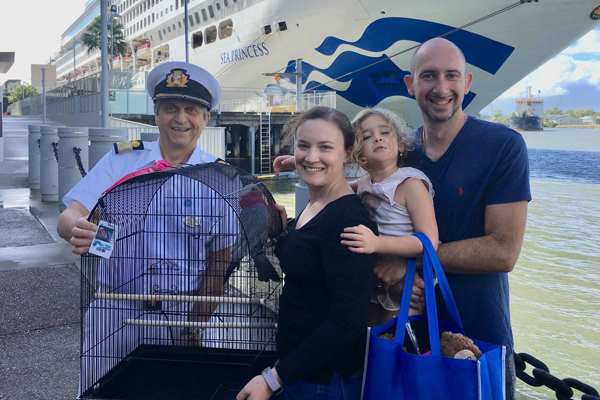 Michelle and Brett Cozzi and daughter Georgia, 4, were very happy to be reunited with their pet. Photo: Cruise Passenger

Harri the stowaway galah has been reunited with her Brisbane family after 14 days at sea on a luxury cruise – having seemingly tried to follow them on holiday.

The eight-year-old pet, who is now internationally famous, was retrieved by her owners, Brett and Michelle Cozzi and their daughter Georgia, 4, after being cleared in a veterinary examination.

It was a pleasing end to a two week ordeal on the high seas for Harri, who escaped her Brisbane home on January 13.

After desperate attempts to find their beloved pet, the family eventually gave up hope and decided to depart on a planned holiday – a four-day cruise to the Whitsundays aboard the Pacific Aria.

But in a surprise twist, Harri was found on January 25 on another cruise ship, the Sea Princess, headed for New Zealand. This was three days after it had left Australia.

“You could forgive some people for not believing it,” Mr Cozzi told The Australian.

“It’s good to be part of a good news story. My humble thanks to all the people involved.”

The ship’s captain contacted Australian and New Zealand biosecurity officials and they were able to track down the owners because Harri had been microchipped.

The agriculture department’s acting head of animal biosecurity, Jackie South, said Harri spent her unexpected holiday locked in an unoccupied cabin on board the boat, checked on by New Zealand officials at each port.

“On return to Australia she passed a veterinary examination, and has now been returned to her owners, who themselves have just returned from a cruise,” Ms South told AAP.

“Perhaps Harri felt she too needed a holiday, but Australia and New Zealand treat biosecurity very seriously, especially in regards to foreign species.”

It seems Harri had a lucky escape. Under New Zealand biosecurity laws, the bird would had to have been euthanised if the crew had been unwilling to care for her, for fear of spreading avian disease.

Thankfully, the ship’s captain was willing to accommodate the surprise passenger while the crew tracked down the owners.

“When the call came through from Agriculture Australia, it was a bit of a shock,” Mrs Cozzi told Seven News.

“We are very excited to have Harri home because she is a much-loved member and indispensable part of our family.

It was amazing to discover she had been found on another cruise ship. It was just the best news possible.”

Harri’s veterinarian, Dr Adrian Gallagher of Brisbane Bird Vet, said he suspected the bird had flown straight from the Cozzi’s home to the wharf.

“From the owner’s place to the wharf is probably not that far for a galah. That’s my thought, he’s escaped and landed on the boat,” he told the ABC last week.

“He’s got a lot of character this bird. He’s pretty ingenious.”

Dr Gallagher said the bird’s adventure was an important lesson for all bird owners to make sure their pets were microchipped.

“We see stacks of lost birds.

“You’ve only got to go on RSPCA websites to see how many there are. And one galah looks the same as the next galah.”

Holiday Harri: Galah reunited with family after stowing away on luxury cruise