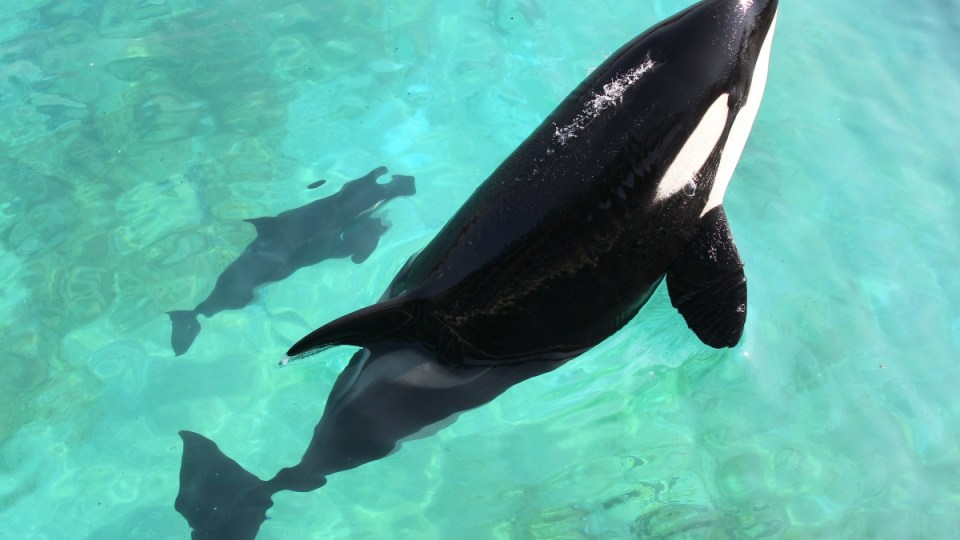 Wikie with her calf at Marineland animal exhibition park in the French Riviera city of Antibes. Photo: Getty

A “talking” killer whale in France that says “hello” and “bye bye” is thought to be the first to be taught to mimic the human voice.

Wikie, a 14-year-old female orca that lives in Marineland in Antibes in south-eastern France, was recorded on video imitating numerous human sayings including the name “Amy”, and even blowing raspberries out her blowhole.

Scientists already knew killer whales could imitate bottlenose dolphins and sea lions, but the research found Wikie was capable of copying the sounds of one of her human trainers.

Researchers at St Andrew’s University in Scotland found Wikie made “recognisable copies” of all the six phrases they said to her, and picked them up “relatively quickly”, according to a paper published in the journal Proceedings of the Royal Society B.

She was tested 30 times for each of them and got “hello” and “one, two, three” on her first time.

Wikie made the noise with her head out of the water and with her blowhole exposed, which researches said was significant as she normally communicates underwater.

Although the subject did not make perfect copies of all of the sounds, “they were recognisable copies as assessed by both external independent blind observers and the acoustic analysis”.

“This accuracy level is particularly remarkable given that the subject possessed a very different sound production system compared to humans,” the paper said.

Observations of killer whales in the wild have shown different pods to have different “dialects”, specific to each group.

The researchers said this recent trial reinforced the orca’s ability to learn through “vocal imitation” and can be maintained through social interaction.

They said it is possible their data represented a “conservative estimate” of the ability of killer whales’ ability to imitate.

“Our data show that killer whales can copy sounds outside their usual repertoire — which is an important piece of information if one wants to know not only what a species does, but also what it can do, under a variable set of circumstances,” the paper said.