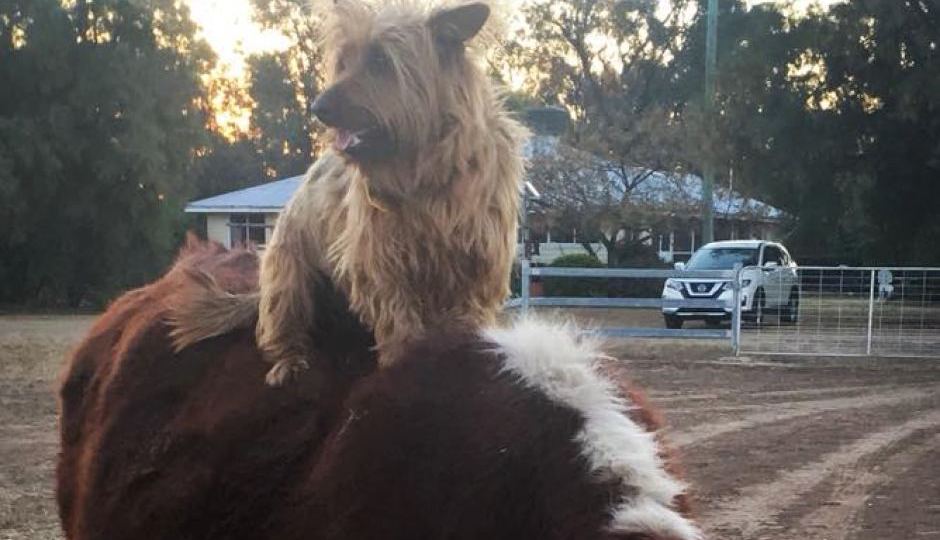 Rusty has spent the past few days being cared for in South Australia. Photo: Laura Scudamore

A crafty Australian terrier from outback Queensland has crossed 1500 kilometres of the country, ending up in South Australia after stowing away in a passing truck.

Laura Scudamore’s dog Rusty had been staying with her in-laws on a cattle property outside Goondiwindi, on the Queensland and New South Wales border, while she and her family were on holidays.

Earlier this month the three-year-old dog somehow managed to stow away on a truck stopped in the area.

“Rusty’s quite happy there [at the in-laws] but he makes a habit of sneaking off to the highway and trying to befriend people as they drive past,” Ms Scudamore said.

“He snuck down and apparently stowed away underneath this truck.

“Some point along the trip the driver realised he was there, but he was in the middle of nowhere, so he took him home to Snowtown.

“Thankfully Rusty had a collar on with a number for my in-laws.”

Ms Scudamore’s in-laws were contacted and informed about the stowaway and are now trying to find a way to have Rusty returned.

Funny thing is – this isn’t the first time Rusty has pulled this kind of stunt.

In late 2016 he made his way to Chinchilla, only 230 kilometres away from home.

“He’s so friendly, that if someone pulls over he’ll just happily jump in the car.”

“I’ve been looking into dog couriers and they’re quite expensive, so I’m trying on the off-chance that someone on my Facebook knows someone, and it’s just gone crazy,” she said.

“The people who have him are really looking after him. They’re sending us photos of Rusty down there.

“We’ve just got to find a way home for him now.”

‘We just hope we can get him home’

Down in Snowtown, Rusty has been in the care of Heather Reid and her family for more than a week.

Her husband Paul McDowell was the truck driver who discovered Rusty in his cabin the day after New Year’s Day, when he was 60km out of Goondiwindi.

“He got up at 5am and was checking the tyres before he started off again, and there’s this little dog sleeping [in the cabin],” Ms Reid said.

“He had no idea where he came from, he was in the middle of nowhere.

“My husband’s a real dog man. He just said he couldn’t leave him on the road, he’d die.”

Mr McDowell looked in the immediate area for the owner, but there was no one around.

“He went walking miles up the road but couldn’t find a house, it was just bush.

From there the pair had a four-day trip together back to South Australia.

Ms Reid said while Rusty was safe and well with her family having a “grand old time”, she was working with Ms Scudamore to get their pet back to Queensland.

“We’re trying to get Rusty home. I wasn’t going to stop until I found Rusty’s home, we knew he was something special because he’s a special little guy.

“You could just tell he’s got a family.”

Ms Reid said the timing of Rusty’s arrival was serendipitous.

“We just lost a dog … we were heartbroken. Next thing he’s got this little dog keeping him company.

“It took our minds off what had just happened to us.”