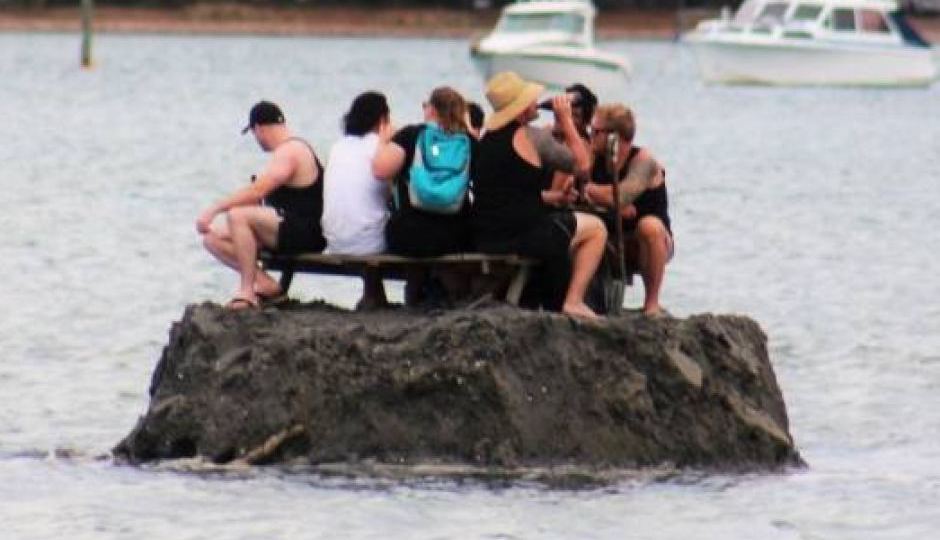 The group of friends were praised for their inventive idea to avoid an alcohol ban. Photo: Facebook

A group of friends came up with a creative plan to avoid a New Year’s Eve alcohol ban, by building a makeshift island in coastal waters.

The ban was put in place at the Tairua estuary on the Coromandel Peninsula on New Zealand’s north island in an attempt to curb excess drinking, but the group found a loophole.

Stuff.co.nz reports they built the island out of sand during a low tide on Sunday, and it was just big enough to fit a picnic table and an Esky.

Because the friends were in “international waters”, they technically were excluded from the alcohol ban.

The alcohol ban covered the whole Coromandel area on New Year’s Eve, and alcohol was not to be consumed at the beach or other public places.

‘I probably would have joined them’: police
People who ignored the ban could be fined $227, but local police commander Inspector John Kelly praised the makeshift island.

“That’s creative thinking — if I had known that I probably would have joined them,” he said.

“That’s the one thing I absolutely love about the Coromandel — the inventive nature of the people,” she told Stuff.

“It’s about creativity; the legal reality is somewhat different.”

The friends stayed on the island throughout the night, drinking alcohol and watching the fireworks.

The island was still standing on New Year’s Day.

He told the BBC, “It was great to see some Kiwis having a bit of fun”.