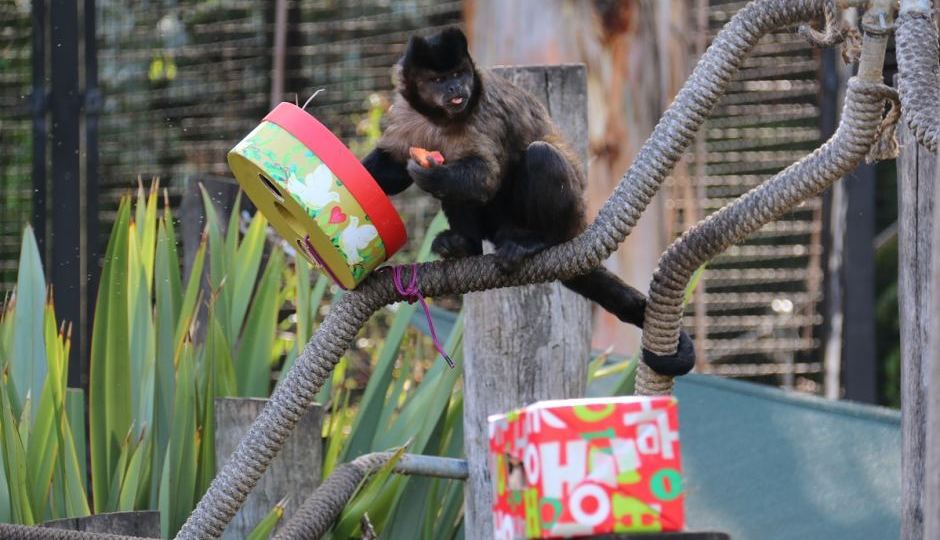 Bugs and bark were on the menu for monkeys. Photo: ABC

Christmas has come early for the animals at Canberra’s National Zoo and Aquarium, with its furry residents receiving special presents – like bug-filled bark – to feast on.

The zoo’s monkeys, tigers, meerkats and sun bears were treated to delicacies such as insects and biscuits spiked with oral hygiene products.

Ms Scott and her helper, Santa “Claws”, dropped off presents at the monkey enclosure first, hanging paper mache baubles and presents off trees.

Ms Scott said inside the packages were a monkey-favourite: bark and bugs.

“Food is a huge motivator for them. It’s something that makes them super excited,” she said.

Next, Santa Claws gave the zoo’s tigers – Ndary and Aceh – something more substantial … in the form of entire chicken carcasses.

“The presents are a little bit different depending on what animal we’re giving it to. A a lot of it contains their daily food but also a special treat as well to make them extra excited,” Ms Scott said.

Ms Scott said while some animals could have potentially found themselves on the naughty list this year, Santa Claws was feeling generous.

“Certainly if I had the opportunity to make a naughty and nice list for our animals, there’d probably be a couple there who would get on it,” she said.

“But we like to give everything a special treat so everything is on the nice list this year.”

Inside were treats designed to boost the bears’ oral hygiene.

And like most people on Christmas Day, Arataki dived face-first into dessert.

Some of the zoo’s newest residents – meerkat pups Surabi, Semush and Sekeema – enjoyed their first Christmas treats together, sampling some chopped vegetables.

The Christmas presents are also part of the zoo’s enrichment program, aimed at stimulating behaviours in the wild.