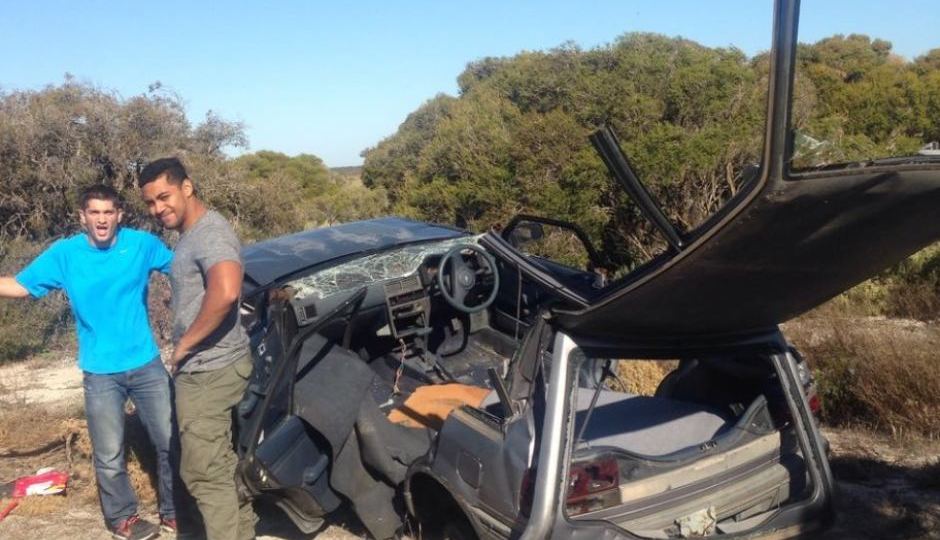 Some of the twins' antics leave wreckage, such as this car, in their wake. Photo: RackaRacka

Two Australian brothers behind successful YouTube channel RackaRacka, which now has more than four million subscribers, are about to make the big move from Adelaide to Los Angeles to capitalise on their skyrocketing popularity.

Twins Danny and Michael Philippou, 24, have just released their latest online clip to immediate success, a Star Wars-style battle staged in the stores and car park of an Adelaide suburban shopping centre.

The pair have mixed emotions about the move to the United States.

“It’s easier for Danny – I’m not so excited moving,” Michael said with a laugh.

Danny admitted he was the keener of the two to move abroad.

“I’m sort of forcing him to come along,” he said.

“It could all fail, so we’re going to go over there and try it for a year.”

“When Danny’s eight projects fail, then we’ll come back,” Michael cut in.

The guys already have a manager in LA who is setting up meetings about their latest projects.

Busy with video production and live appearances, the Philippou brothers are part of a rapidly changing media consumption landscape.

They have made it into a top-10 list of Australia’s most influential cultural people, in the Australian Financial Review, and been named in Variety magazine’s list of top “Famechangers”.

It was their ‘Harry Potter versus Star Wars’ clip on YouTube that shot them to fame in 2014, a clip which has been viewed more than 21 million times.

RackaRacka’s early YouTube clips were made at their father’s house at suburban Pooraka, from where their online name is derived, and they moved out after causing lots of wall and ceiling damage with their antics there.

They admitted their move to another house helped ease their father’s anguish.

“We had to give our dad a break … he didn’t kick us out, we left,” they explained, finishing each other’s sentences as twins sometimes do.

There are firm plans for the twins to be back in Adelaide next year to shoot their first movie, Concrete Kings, with locally based Triptych Pictures.

Adelaide twins RackaRacka head to US after huge YouTube success