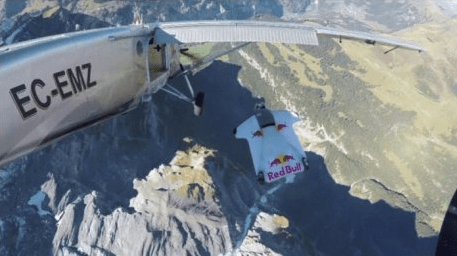 Usually people jump out of planes to get their kicks but two French daredevils have gone one better: boarding a plane mid-air.

First, they had to jump off a mountain.

The pair soar low over the frozen landscape as they approach the small plane.

It is silent, except for the whistling wind, and soon, the sounds of a man in the plane calling out an unusual instruction for a plane mid-flight.

The pair hurtle through the open door and cheers ring out.

The flyers, along with pilot Philippe Bouvier and navigator Yves Rossy, completed more than 100 practice flights in preparation for the spectacular stunt with many attempts not going to plan.