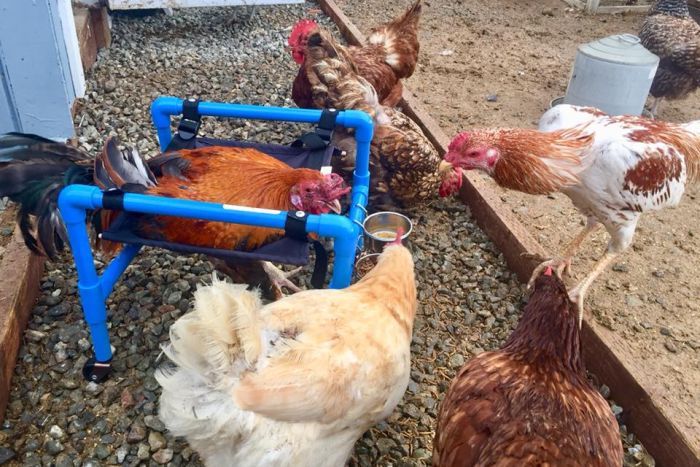 The chairs are made out of PVC pipe, with wheels and food bowls attached. Source: Funky Chicken

An injured rooster in the United States is learning to walk again with the help of a Melbourne-made wheelchair and a kind anonymous donor.

Darcy Smith, a retired police officer in Northern California who adopts rescue animals, ordered the wheelchair for her rooster Roo after it suffered a head injury and could not walk or stand.

The rooster took to the custom-made chicken wheelchair from Australia “straight away” and Ms Smith hopes Roo will be able to walk on its own again soon.

“The change in behaviour was immediate – his eyes brightened up and he was able to be himself again,” Ms Smith told the ABC.

The chair came all the way from the Melbourne suburb of Murrumbeena, where a one-woman operation has been busy trying to meet a huge demand for poultry-specific wheelchairs.

“It’s just me in the garage and in the spare bedroom doing all the sewing,” Miranda Boulton said. “It’s not profitable, it’s a labour of love.”

Ms Smith posted about Roo’s progress on her Facebook page Funky Chicken, where she gives 2200 followers regular updates on the other chickens at her home.

It was one of these followers who found out about the order from Chicken Therapy Chairs, and got in touch with Ms Boulton to make an anonymous donation and fast-track the delivery.

“I’d really like to thank them, it really made my day,” Ms Smith said.

“I think they did it as a random act of kindness out of the goodness of their heart.”

Chickens ‘part of the family’

Ms Boulton, who also works as a childcare director, first made one of the small wheelchairs for a rescue chicken that needed rehabilitation at the start of year, and has made more than 100 since then.

Most of the demand for her chairs comes from the United States, but she has also made them for people in New Zealand, Denmark, Germany, Canada and the United Kingdom.

You might see wheelchairs for dogs and cats, so there’s a lot for our four-legged friends but nothing out there for chickens – I guess there was a gap in the market.”

“There are so many chicken enthusiasts in America … especially in the north a lot of people have to bring their chickens indoors in winter, so they’re really part of the family,” Ms Boulton said.

Ms Smith’s family in Northern California has also rescued cats, dogs, horses and other animals – as well as more than 30 chickens – and to her the feathered pets are no less loved than the four-legged ones.

“Roo is not just a rooster or chicken – Roo is our pet like a dog or cat would be, and we love him very much.

“That’s why we’re trying to get him healthy again.”

Watch some of Roo’s rehabilitation below:

Birds of a feather roll together: Melbourne-made chicken wheelchair is something to crow about