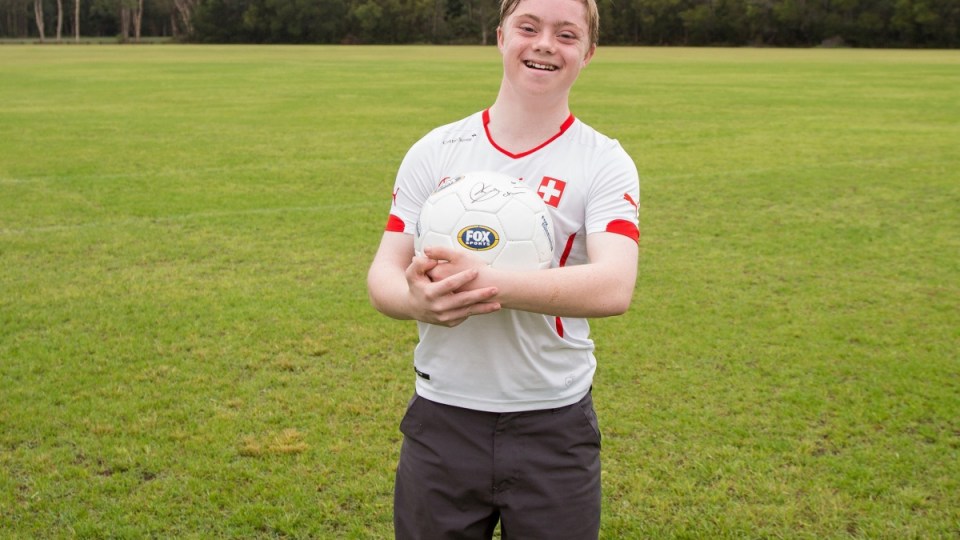 Marc has continued to play sports, but has had to stop soccer after a parent complained.

When Marc Reichler-Stillhard, 16, added a special trophy to the big collection already in his bedroom last Monday night, his mum Enid witnessed a scene that seemed hard to imagine the day he was born with Down syndrome.

“Marc was a surprise package. We didn’t have a prenatal diagnosis and were in shock,” she told The New Daily.

“I had concerns about lots of things such as schooling and would he ever be able to do the things other kids do. That includes team sports.”

Marc’s trophy shelf is now so crowded with awards for cricket and footy, his mum, like any teen’s parent, just wishes he’d dust them occasionally.

“Growing up in rural areas, so much revolves around sport. If you don’t have those sporting contacts it can be difficult to form social connections in the community,” Enid said.

“Marc has an ability to connect with all sorts of people. He seems to touch hearts and bring out the best in people, so lots of those fears have gone away.”

The ‘honorary local legend’ award, presented by children’s TV channel Nickelodeon at its 2017 Kids Choice Sports Awards, means a lot to Marc, his mum and the local Yamba, NSW, community because it followed a rough time for the family.

Initially everything was great. Marc’s coach came up with the idea of playing him as an extraordinary 12th player in his beloved under-14s soccer team.

For two years, it worked well and brought out the very best in the entire Yamba community. His teammates describe how everyone – even the opposing team’s players and spectators, gave an extra big cheer when Marc got the ball.

“The teams, both his and the opposition, always make sure during the game that he has an opportunity to play the ball,” Enid said.

“Watching the opposition team give Marc the ball and trip over their own feet to let him score a goal was one of the best events of my life. When you consider these are young kids, it’s amazing. They see how hard he tries and love that about him.”

When he turned 16, Marc couldn’t keep pace with the others as he was still playing as the 12th player in the under-14s. Officially, it was the bending of two rules about age and number of players in the 11-a-side game, but nobody seemed to mind. Then, the complaint came.

A parent from an opposing team lodged an official complaint to the organising body, North Coast Football, which was upheld. Marc could still play, they said, but not as a 12th player.

This effectively banned him from the game because his mum said it would be “selfish” to force his team to effectively be “one player short”.

Enid didn’t tell Marc the full story of his ban, to protect his feelings: “I think he would’ve been very upset. Nobody wants to be excluded. Marc’s no different in that respect.”

Marc continues to be the grinning prankster everyone knows and loves, unaware of the heartbreak that one parent’s complaint, and his ensuing ban from the sport he loves, has caused.

“Marc loves waiting for the school principal to walk past and taps him on the shoulder and hides when he turns around,” Enid said.

But Nickelodeon’s award, presented to him by a montage of his favourite sports stars who said they “wish he was on their team”, has brought goodwill back to the community of Yamba. Marc loves telling people he’s a “legend”.

What would his mum go back and tell a shellshocked Enid on that day Marc was born?

“Don’t cross any bridges before you have to! Marc will surprise and amaze you with what he’ll do … I never thought any of this’d happen, especially this Nickelodeon award!”

Enid has a surprising message today for that one parent who complained.

“Funnily enough, it’d be thank you – but only after telling them how upset we were. We’ve been shown that the wider community accept and love Marc and will look out for him.

“As a parent with a child with a disability you always wonder, will they be OK? Who will protect them when you aren’t there?