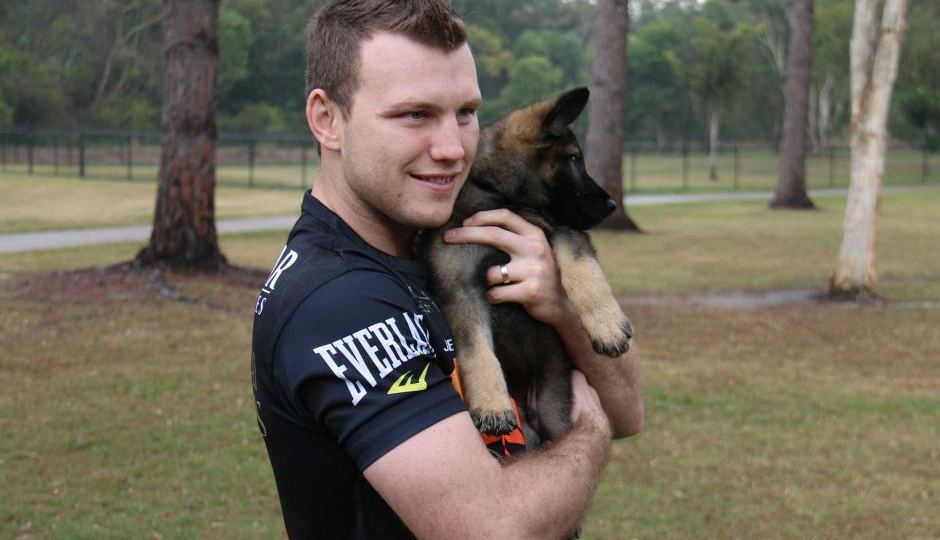 Jeff Horn said he was proud to have a future police dog share his name. Photo: ABC

He may only be seven weeks old, but Hornet the German shepherd has his whole future mapped out.

The puppy will soon begin training to become the newest addition to the Queensland Police Service Dog Squad.

Hornet, part of the squad’s “H” litter, was named after world champion boxer Jeff “The Hornet” Horn after his victory against Manny Pacquiao in July.

“Jeff was just holding up the belt, and it was just after that we got the call that she’d had three boys and four girls,” he said.

“Being our H litter, how could we not call him Hornet?”

He said after this time they were qualified to go out on the road as police dogs.

“They’re also trained to apprehend – so bite – [and] protect the handler.”

Some of the dogs are also trained in other areas, including soft-drug detection and urban search and rescue.

‘He has a high drive for chasing things’

Hornet will start his training in two weeks, where he will be fostered by a senior constable on the Sunshine Coast and likely become his next police dog.

Sergeant Hansen said this next stage was vital to the young dog’s development.

“He’ll start his tracking development, his prey and bite work development, and also his socialisation and getting used to the big wide world,” he said.

But Sergeant Hansen said the puppy was already displaying natural instincts that should make him a successful police dog.

“We did testing over the last week and he has a really high drive for chasing things,” Sergeant Hansen said.

“[He’s a] confident dog, compared to the litter mates – some showing signs of a little bit of hesitation in some areas.

“He just stood out as a very self-secure little dog.”

Horn said he was proud to have a future police dog share his name.

“He’ll do some good work having the name Hornet,” he said.

“He’s probably nearly just as fast as me!”