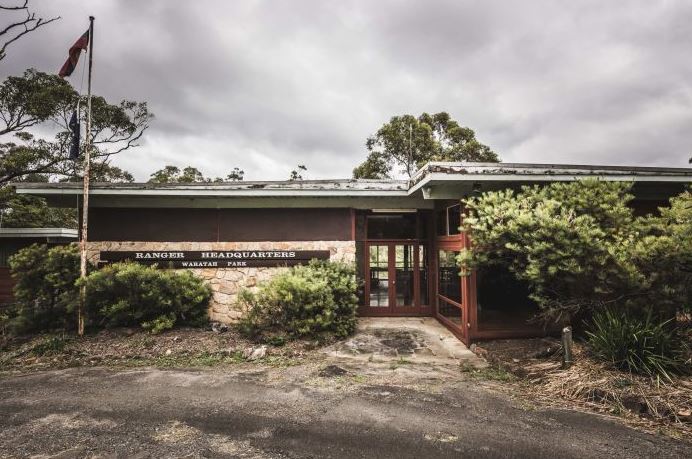 Ranger Matt Hammond, played by Skippy star Ed Devereaux, wouldn't be pleased by the tumble-down state of his old HQ.

The centrepiece of iconic TV series Skippy the Bush Kangaroo — The Rangers Headquarters — is one step closer to being restored to its former glory.

Sydney’s Metropolitan Local Aboriginal Land Council (Metro LALC) has received a $10,000 grant to begin drawing up a strategy for its restoration.

Waratah Park, formerly Crown land, was handed over to the council in 2014.

Located in Duffys Forest in northern Sydney where the series was filmed, the red  building was home to head ranger Matt Hammond, played by  Ed Devereaux, and his sons, Sonny (Garry Pankhurst) and Mark (Ken James), at least when they weren’t running around fighting crime and playing with their loyal companion, Skippy.

The show ran from 1967 to 1969 and was filmed predominantly in bushland on Sydney’s northern beaches.

For years after the series ended, the site was run as a wildlife theme park. It was closed to the public in 2006.

Much of the park has “fallen into disrepair” over the years according to Jenny Harris, president of the Duffys Forest Residents Association, which organises monthly bush regeneration activities.

“Once [the strategy is written] it will open the door to apply for funding to get the building restored, to get the Skippy memorabilia back up,” Ms Harris said.

While renovation of the building may still be some years off, Ms Harris hopes to see the site eventually reopened to the public for education purposes.

“Then we can share the two cultures: the culture associated with filming Skippy the Bush Kangaroo and the Aboriginal Heritage Centre, which will connect Aboriginal people back to the land and educate non-Indigenous people about Indigenous heritage,” she said.

Photographer Brett Patman, who was invited by the Duffy Forest Residents Association to take photos in the park earlier this year, said he was surprised at the site’s poor condition.

“I thought something like Skippy would have some kind of guaranteed protection,” he said.

“There’s older animal enclosures but it’s a bit dangerous to go in because there’s asbestos and it’s falling down.

“The ranger hut is a bit dilapidated from the outside and the roof is starting to come apart.”

Despite its state, the building was able to host a 50-year reunion between the show’s cast, crew and their families in May.

Phil Judd, who worked as a sound engineer on 90 episodes of Skippy, said returning to the site was “nostalgic”.

“They still have the props and original furniture from the theme park.

“The Residents Association is trying to keep it alive because it is iconic for people from around the world.”