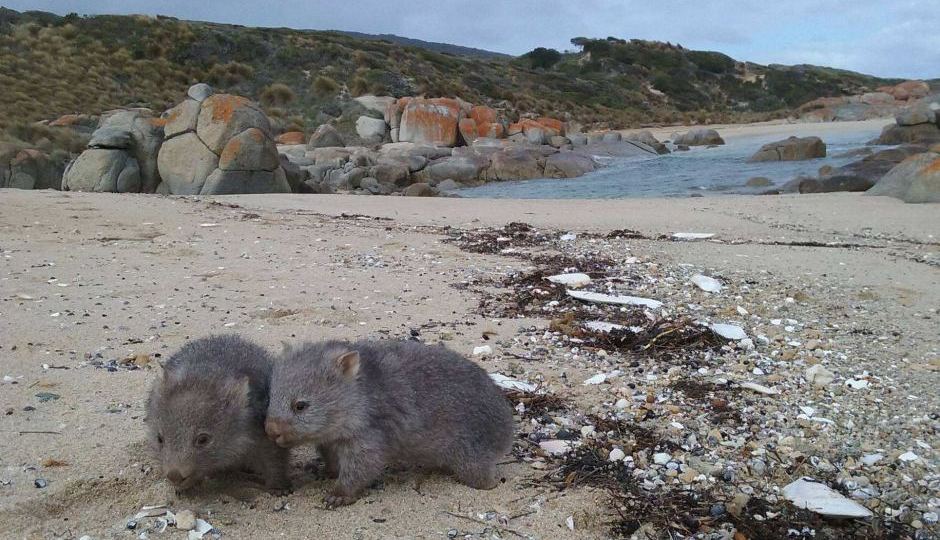 The wombats on Flinders Island are a sub-species and are smaller than those found in Tasmania. Photo: Supplied: Mel Telser/ABC

It may not come as a surprise that a video of a baby wombat has gone viral, however, what has shocked local wombat rescuer Kate Mooney is that the clip is now attracting tourists to the island a year later.

As a joey, Derek the orphaned wombat melted hearts around the world after the video of him running along a Flinders Island beach was picked up on social media.

A year later Ms Mooney is known far and wide as the Wombat Lady of Flinders Island and she is still tracked down by people who have seen the video.

“It seems to have gone a bit crazy but hopefully it will bring people to my beautiful island and see it as it is, which is a beautiful place,” she said .

Visitors to the island have tracked Ms Mooney down and requested a visit to her farm to cuddle a wombat.

“It’s quite rewarding just to see people when they hold a wombat, the joy they have to actually hold a wombat … they do like being cuddled,” she said. 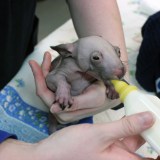 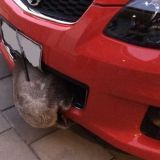 Koala gets wedged in car grille … and survives

For the past two decades wombats injured on the island’s roads have been sent to Ms Mooney’s 40-hectare farm for some rest and rehabilitation.

“The only predator really is the car,” she said.

“They are a sub-species these Flinders Island ones, they are smaller than the Tasmanian ones, the only other population of them is actually on Maria Island [Tasmania’s east coast] so they’ve been released there,” she said.

Ms Mooney has nursed more than 100 orphaned or injured wombats back to health before returning them to the bush.

“Twenty odd years ago somebody found a wombat on this road and gave it to me, and that’s what started it. Batsky was the first one and that was a very long time ago,” she said.

Derek came into her care after his mother was hit by a car about 12 months ago.

At the time he was only about 700 grams.

“Derek is becoming an annoying teenage boy; still cute, but a bit of a tear-away,” Ms Mooney said.

When she is not looking after wombats, Ms Mooney is doing her day job — wool classing.

When the ABC’s Landline caught up with her she was on nearby Badgers Island classing wool for the Stackhouse family.

“I love coming out here, it’s probably my favourite shed, you work hard but you still have a lovely time when you stay, which we haven’t done for four years,” Ms Mooney said.

“It’s great, [we] play cards, everything gets cooked for you, you don’t have to do anything.”

The small 1000-hectare island is off the west coast of Flinders and is one of more than 50 that make up the Furneaux Group.

Farmers have been running stock out there and producing wool for well over 150 years.

However, wool classing is not Ms Mooney’s first love; back home on the bigger island of Flinders, the wombats need her attention.

“The wombats take up a lot of time, but they are rewarding, you’ve seen lots of healthy ones around here, I don’t think farmers are very impressed but it’s my land,” she said.

“Some nights I have 13 staying, I do spend a lot of money feeding them.”

Five thousand tourists visit Flinders Island each year and the tourism industry is growing slowly and little wombats like Derek are certainly helping.