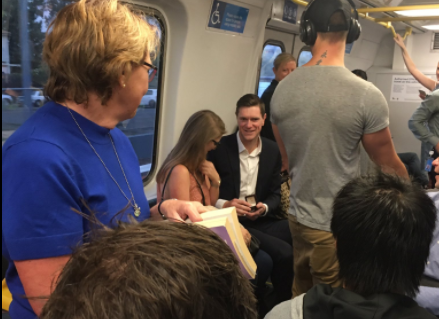 A Melbourne man has popped the question to his girlfriend on a busy carriage during Friday’s morning peak commute, 10 years after the couple first met on a train.

And thankfully, she said yes.

The meticulously planned proposal warmed the hearts of fellow passengers on the city-bound Frankston line train, with many taking their phones out to film as Ryan asked Hannah to marry him.

These two lovebirds met on a train 10yrs ago & with a little help from our driver, Ryan popped Hannah a special question this morning… pic.twitter.com/2eYysokCHI

SHE SAID YES! Congrats from all of us at Metro & your fellow passengers on the marriage carriage from Frankston to Flinders Street. pic.twitter.com/J3yVcbs9DM

At first, Hannah seemed oblivious as the train driver comes over the loud speaker and begins talking about passengers on carriage four.

“We have two of our regular commuters on the train today, Hannah and Ryan,” the driver said.

That’s when the penny drops. But the driver continues.

“They met on the train 10 years ago. And they’ve been madly in love ever since,” he said.

Soon, Ryan is on one knee and the entire carriage has its collective heart in its mouth.

They needn’t have worried. A clearly overwhelmed Hannah offers the words Ryan – and the rest of carriage four – had been waiting for: “Yes.”

Other commuters were quick to report the good news on social media.

A marriage proposal on the frankston line @metrotrains. Congrats Hannah!

Melbourne’s Metro Trains, which presumably had a hand in arranging the proposal, also offered its congratulations, tweeting: “We’re thrilled that you choo choo choose each other. Wishing you a long life of happiness and love together. Next stop: the wedding!”