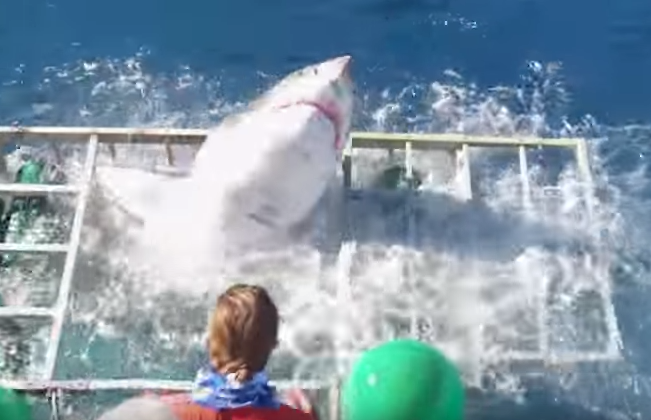 The moment the shark manages to get out of the top of the cage. Photo: YouTube.

Stunning footage has emerged of a great white shark smashing through a diving cage and escaping through the top while a diver was still inside.

The breathtaking video was captured off the coast of Guadalupe Island, in Mexico, by a Californian man who documents the his adventures with his two sons.

The video posted this week shows the shark squeezing its way into the cage and thrashing around for a heart-stopping time in the cramped space while the diver was stuck inside.

“What might appear to be an aggressive great white shark trying to attack the cage, this is not the case,” the cameraman wrote on his YouTube account, Gabe and Garrett.

“So this shark lunged at the bait, accidentally hit the side of the cage, was most likely confused and not able to swim backwards, it thrust forward and broke the metal rail of the cage.”

When it becomes apparent the shark has breached the cage, one of the crew throws open the roof of the cage and stands back as the shark thrashes around and finally finds its way out of the top of the cage.

“The diver is a very experienced dive master, remained calm, and when the shark thrashed back outside the cage, the diver calmly swam back up and climbed out completely uninjured,” the man wrote.

Thought you were safe in a shark cage? Think again